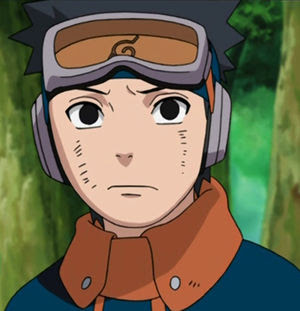 Obito Uchiha (うちはオビト, Uchiha Obito) appeared in the Kakashi Gaiden arc as a former teammate of Kakashi Hatake, and a member of Team Minato.

Obito graduated from the Ninja Academy at the age of 9, and was promoted to Chunin at the age of 11. During the Third Great Shinobi World War, Team Minato was assigned the task of destroying the Kannabi Bridge. Because Kakashi had recently been promoted to Jonin, he was to be left in charge of the mission. Before setting out, however, Minato Namikaze and Rin gave Kakashi gifts, something Obito forgot to do. Minato left them to go fight on the front lines, and Rin was soon captured by Iwagakure forces. Kakashi chose not to go save her, placing the mission's completion first, but Obito refused to comply, stating that, while those who break the rules are trash, those who abandon their friends are worse than trash. They parted ways.

When Obito found where Rin was being held, he was immediately attacked by Taiseki. Kakashi, having had a change of heart, arrived in time to save Obito, and Taiseki used the Hiding Camouflage Technique to disappear. Invisible, Taiseki was able to damage Kakashi's left eye. To save his teammate, Obito awakened his Sharingan, immediately proving proficient enough with it to locate and kill Taiseki. Obito and Kakashi went to save Rin, but once she was freed, an enemy-induced cave-in started. Obito pushed Kakashi out of the way of a falling rock, and his right side was crushed. Unable to free himself, Obito asked Rin to give Kakashi his remaining Sharingan eye, to make up for not giving him a gift earlier. Once the eye transfer procedure was complete, Rin and Kakashi were forced to leave, the cave continuing to collapse around them. Obito was then crushed by boulders as he was thinking about his two teamates.

Obito was constantly tardy, always claiming he had been doing a good deed, such as helping an elderly woman carry her luggage. Minato referred to this as the truth, though Kakashi didn't believe him. Obito was also a little stubborn at times, yet, unlike Kakashi, who was very strict of the rules and regulations, he was usually carefree, and would rather save a teammate than complete a mission - the same as Kakashi's father, Sakumo Hatake. Obito would also lie to get out of trouble or just an uncomfortable situation - whenever he would start crying, he would claim he had something in his eye, though usually at the time he had his goggles on. Obito had romantic feelings for his female teammate Rin, though he never revealed it to her, not even when he was dying.

Obito looked similar to Naruto Uzumaki, and they both also have similar personalities. Both Naruto and Obito were desperate to get attention as a child, they both have an epic rivalry with their other male teammate (Sasuke and Kakashi), and they both have romantic feelings toward their female teammate (Sakura and Rin). They were also considered "goofballs" or "knuckleheads" because of their recklessness.
at 10:08 AM