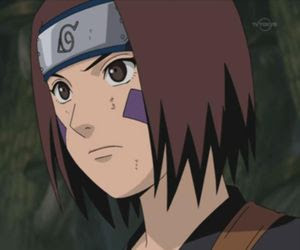 Rin (リン) was a medical-nin who appeared in the Kakashi Gaiden arc as a former teammate of Kakashi Hatake, as well as a member of Team Minato.

During the Third Great Shinobi World War, Team Minato was assigned to destroy the Kannabi Bridge. Rin was kidnapped during the course of the mission, and her captors, Iwagakure ninja, used genjutsu on her to find out if she knew anything about Konoha's war efforts. Kakashi and Obito staged a rescue effort, and, although they succeeded, Obito was crushed in a cave-in caused by the fleeing captors. Before he died, he asked Rin to implant his Sharingan eye into Kakashi's damaged eye socket. After the procedure was completed, Rin and Kakashi were forced to flee the continuing cave-in, and, with the help of Minato, went on to complete their mission.

Rin's fate after this is unknown. She is assumed to have died, as Kakashi has indicated that all those close to him were dead. Another implication of her death is in Kakashi's last thoughts before he fell against Pain, lamenting on the fact he failed to protect her.

Rin was a sweet and friendly girl who cared for her teammates and leaders. She shares many similarities with Sakura Haruno, such as their prowess in medical techniques and their similar hairstyles. She also had the same position in the love triangle of her team; Obito had a crush on her, but she had a crush on Kakashi. Still, she was much more passive about it than Sakura; while Sakura repeatedly insulted Naruto, calling him stupid and such and almost always siding with Sasuke, Rin never called Obito any names or shouted at him, and, when trying to break up arguments, she did not take sides.
Rin healing Kakashi.

As a medical ninja, Rin's primary duty in missions was to give support to her teammates. Despite her age, she was shown skilled enough to aid a team on a high-ranked mission. She also demonstrated high skill by quickly and successfully implanting Obito's remaining Sharingan eye into Kakashi with only basic medical tools.
at 10:13 AM