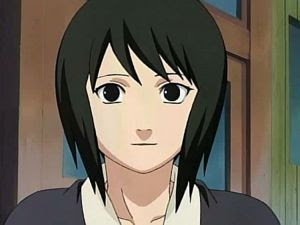 Shizune (シズネ) is a Jonin-level Kunoichi of Konohagakure. She has served as Tsunade's Aide-de-camp for years. Shizune was also Tsunade's apprentice, becoming a talented medic-nin. She is quite close to Tsunade, being one of the few people Tsunade would trust with absolute certainty, and a fairly talented and capable ninja in her own right.

Shizune is the niece of Dan, the late lover of Tsunade. Sometime after Dan died, Tsunade left Konoha, and Shizune went with her as her attendant. The bond between Tsunade and Shizune is strong and, above all, Shizune sees her purpose in life as caring for Tsunade.
edit Personality

Unlike Tsunade, she is level-headed, practical, and a rational thinker. As a result, she is the one who tends to stress over details, such as Tsunade's tendency to gamble and to think with her heart. She often gets comically worked up over any irrational decision Tsunade makes. Shizune also looks after Tonton, Tsunade's pet pig.

Shizune also doesn't get tired very easily especially when she has a lot of energy to help Tsunade with the paper work and never stops urging Tsunade to keep on working and often is seen asking Tsunade questions about what to do with the Village and ninjas on missions.

When Orochimaru came to Tsunade years later in an attempt to get her to heal his arms, Shizune attempted to persuade Tsunade against it, even trying to convince Tsunade to help her kill Orochimaru. When all attempts to persuade Tsunade failed, however, Shizune tried to use force to stop Tsunade from helping Orochimaru, although Tsunade easily defeated her. She later fought Kabuto Yakushi in an effort to protect an incapacitated Tsunade and Naruto Uzumaki. Despite Shizune's efforts, Kabuto proved too much for her, as he easily dodged her attacks and incapacitated her, too. Shizune managed to heal her legs, and left the field of battle with the unconscious Naruto as the three Sannin prepared to conclude their battle. She then returned to Konoha with Tsunade after she accepted the office of Hokage.

When Tsunade took on the title of Hokage, Shizune led a team consisting of Genma Shiranui, Raido Namiashi, and Iwashi Tatami to compensate for the lack of manpower caused by the invasion of Konoha. When Genma and Raido were defeated by the Sound Four, Shizune healed their wounds. Later, she was seen leading a medical team charged with regenerating the wounds of Neji Hyuga.

She appeared in almost every filler arc as Tsunade's attendant and secretary. During the Mizuki arc, she was defeated by Mizuki, who used her guise to lead Naruto and Iruka into a trap. She was later seen as part of a reinforcement team with Shikamaru for Naruto, Choji and Hinata during the Land of Vegetables arc.

Shizune appears frequently in Part II, often being nearby when Tsunade is issuing orders. She began to grow concerned by Naruto repeatedly going up against members of Akatsuki, and reported this to the village elders. Although Tsunade was able to reach a compromise with the elders, Shizune doubted Tsunade's wisdom, but she seemed to regain faith later on.

In the anime, Shizune was assigned to help seal the Three-Tailed Beast, joining the sealing team along with Ino, Sakura, and Hinata. Seeing the beast's sealing as a way to stop Akatsuki's plans, Shizune took charge of the process, instructing the other members in order to speed along the process. The sealing was repeatedly interrupted by Guren and her men, however, and the sealing was instead left to ANBU members.

After Jiraiya was killed by the Akatsuki leader, Pain, Shizune was left in charge of examining the body he had captured. When Shizune discovered that the piercings on the body were chakra receivers, she was given ANBU escorts to ensure she could share the information with as many people as possible. She meets up with Inoichi, but before they could begin to collaborate, Shizune was captured by the Human path. It read her mind to find out that Naruto was at Myōbokuzan, and then removed her soul, killing her. In the ensuing destruction, her body was kept safe, and was later revived by Pain's resurrection jutsu.

Shizune was later seen with Naruto, Sakura, and Kakashi, looking down on Tsunade, who was now in a coma. She was later seen explaining to Samui that Tsunade was unable to take the letter meant for the Hokage, and was shocked when Danzo arrived and stated that he was the new Acting Hokage. She is later seen tending to Tsunade and is also present when Sai tells Sakura how Naruto feels for her.

Shizune has rarely been seen fighting in battle, but it is apparent that Shizune's attacks are based (ironically, due to her medical talents) solely around poison. Being a medical-nin, she has to keep her distance in battle, making sure not to injure herself so she can be of use in healing her teammates later. However, she appears to be quite fast and equally fierce and precise in her attacks, as stated by Kabuto.

Shizune is noted to be a very talented medical ninja, rivaled only by Sakura and Tsunade herself. It has apparently given her excellent chakra control, which is the primary reason she was assigned to help seal the Three-Tailed Beast.

Shizune is commonly a playable character in the Ultimate Ninja series of games. She is seen to be able to create swords out of chakra in a move called "Chakra Swords: Great Cross Slash", which causes both physical and internal damage to her opponent, and creates a huge explosion. She also has a jutsu called "Hog Style: Tonton", which calls on Tonton to attack Shizune's opponent, hitting the opponent up to 30 times to cause major damage.
at 9:58 AM