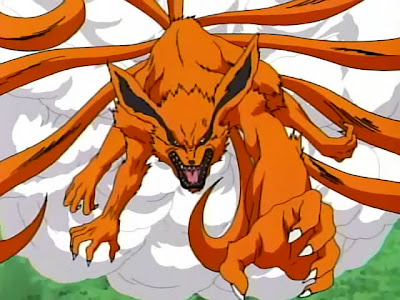 The Nine-Tailed Demon Fox (九尾の妖狐, Kyūbi no Yōko) is the most powerful of the Tailed Beasts; a single swipe of one of its nine tails can raise tsunamis and flatten mountains. After the demon fox attacked Konohagakure, Minato Namikaze, the Fourth Hokage, sealed it within his newborn son, Naruto Uzumaki, by using the Dead Demon Consuming Seal, sacrificing his own life to do so.

The demon fox is an age-old natural disaster that can appear out of nowhere and goes into areas where human malice collects and festers. At an unknown time, the demon fox met with the founder of the Uchiha clan, Madara Uchiha, who used his Mangekyo Sharingan to control it and was used to battle against Hashirama Senju, the First Hokage, for revenge. The battle was so great, that it tore the earth apart and it created the Valley of the End, but despite controling the demon fox's power, Madara was defeated. Many years later, he allegedly used the demon fox again to attack Konoha (although Madara claims that the demon fox's attack on Konoha had nothing to do with him or the Uchiha, saying it was a "natural occurance"). During the attack, the demon fox decimated all the ninja that came to repel it, but was defeated by Minato and Gamabunta. After they defeated it, Minato sealed the demon fox within Naruto, which freed it from Madara's control. Ever since then, the demon fox has a special loathing for the Sharingan and those who use it. The demon fox even remarked Sasuke Uchiha's eyes and chakra are more sinister than its own, because his Sharingan reminded it of Madara. As the demon fox was being supressed by Sasuke, it warned him not to kill Naruto, he will only live to regret it if he did.

In an anime-only filler arc, Naruto, Sakura, Yamato and Sai travel to the Fire Temple to investigate the mysterious robbing of the graves of three legendary ninja. While investigating, they befriend a young monk named Sora. Over the course of the arc, however, it is revealed that Sora was infused with chakra left over from the demon fox's attack, making him a Psuedo-Jinchūriki, capable of generating a demon fox cloak similar to Naruto's.

The demon fox is a giant beast of almost complete malevolence. It is intelligent, and has a sadistic and sarcastic personality. However, it does have a sense of honor, and possesses a loathing respect for Naruto and Minato. Additionally, it has a distinct sense of pride and became rather angry and scornful at Naruto when he rejected its chakra in Part II, though this might have merely been anger over missing an opportunity to partially usurp control over Naruto's mind and body and thus weakening the seal. The demon fox relishes the thought of killing Naruto, but it knows it has to help as long it's sealed within him or it will die.

The demon fox will go to great lengths to preserve its own life, as shown when it forces its chakra into Naruto whenever his life is in danger. It will even back down; it is clear that Naruto would do harm or kill himself if it refuses to follow his orders.

The demon fox, as expected, seems to have a plan for escape. When Naruto first met Sasuke after his defection, the demon fox told Naruto to remove the seal internally so that Naruto would have full access to its chakra. It has also been stated that if the seal is broken, or if Naruto draws too much of it's power, the demon fox would be released. As such, during Part II, the demon fox eagerly offers its power to Naruto when fighting against Orochimaru and during his later encounter with Sasuke. This plan, however, failed as Naruto refused to use the demon fox's power, and it has yet to make an appearence since it was suppressed by Sasuke and rejected by Naruto.

During Naruto's element training, the demon fox was forcing its chakra into one of Naruto's shadow clones. Its reason for doing this is unknown, but it apparently has something to do with its plans for escape.It is most likely that it will attempt to take over one of the clones and release itself there.

As the demon fox's host, Naruto has accelerated healing, unrivaled stamina and speed, massive strength, and access to the demon fox's near-limitless chakra. The demon fox's chakra allows Naruto to perform his signature jutsu, Shadow Clone Technique, seemingly without limit. He is even able to summon Gamabunta, a normally Kage-level feat requiring a huge amount of chakra proportionate to the size of the summoned creature.

Naruto typically accesses this prodigious supply of chakra from the demon fox during extreme emotional states or life-threatening situations. When he first accessed it, the demon fox's innate rage took over Naruto's mind, causing him to strike out at whatever was near him at the time. Afterwards, Naruto learned to exercise more control over the chakra, and he can now retain his mental state when drawing upon small amounts of the demon fox's chakra. After Jiraiya's training, Naruto learns to summon a small degree of the demon fox's power at will. To do this, Naruto travels into his own subconscious (depicted as a sewer) and demands the demon fox to give him its chakra, which he calls "rent". The demon fox simply complies with him because it is amused by Naruto's bravery, and knows that it will die if Naruto dies.

Hiruzen Sarutobi and Kakashi Hatake allude that if Naruto loses all control of the demon fox's chakra, the seal will break and the demon fox will be released. Though the seal is unlikely to break on its own, the chances of it happening increase as Naruto draws upon the demon fox's chakra. After Naruto trained with Jiraiya, he inadvertently released Naruto's four-tailed transformation. Jiraiya mentions that the seal may be becoming weaker over time. This is evident in Naruto's transformations, which occur much quicker and with greater intensity than they did in the first part of the series, often against his own will. As seen during Naruto's training sessions, even the slightest amount of frustration on Naruto's part allows the demon fox's chakra to leak out in excess, and Naruto rapidly progresses to a four-tailed state.

Apparently, while within Naruto, the Mangekyo Sharingan can't be used to control the demon fox, however, someone with a good control of even a normal Sharingan is apparently still able to suppress its chakra (as demonstrated by Sasuke). Also, it seems to be rejecting Fukasaku when he tries to merge with Naruto during his Senjutsu training for reasons unknown (although it can be safely assumed that it was so that Naruto would have no choice but to rely on its chakra).

Jiraiya later reveals that Naruto's four-tailed transformation was his doing by using the toadkey with the same seal on its belly as on Naruto's. He had the toadkey "twist" the seal a little, which resulted in the demon fox's chakra taking over. Jiraiya mentions that Minato split the demon fox's chakra in two halves, sealing the Yin chakra making it inaccessible to Naruto, but sealing the Yang chakra in a manner that allows Naruto to access it.

A kitsune (狐, fox) is a well-known character in Japanese folklore, and the influence behind not only the demon fox, but many other reincarnations in modern Japanese culture. It likes to play tricks and pranks on people, and on occasions, transforms itself into a beautiful woman and seduces a man (obviously the inspiration for Sexy Technique). Also, kitsune are known to keep their promises, a trait Naruto has; his ninja way is to "never go back on [his] word". It should also be noted that every time Naruto loses control and is overwhelmed by the demon fox's chakra, he seemingly gains another "tail" of chakra. This stems from the belief that the more tails a kitsune has, the more powerful it is, with nine tails usually being the limit.

It might also be noted that according to Chinese mythology, the last king of the Shang Dynasty was seduced by a beautiful, but malevolent nine-tailed fox spirit, which eventually resulted in his downfall, and this could have been another source of inspiration for the demon fox.

Many incorrectly believe the demon fox's name is "Kyuubi", the direct English pronunciation of "Kyūbi". This when the demon fox is referred to, it is usually called "Kyūbi", which stands for "Nine-Tails". This is similar to the belief that Minato Namikaze's name, before being revealed was "Yondaime", which really just means "Fourth"
at 1:32 AM