The Akatsuki (暁; English TV "Akatski"; Literally meaning "Dawn or Daybreak") is a criminal organization of S-Class missing-nins, minus Pain and Konan. Their main goal is to collect all of the tailed beasts for their plan of controlling the world. As such, the Akatsuki, despite initially having a minor role during the first half of the series, became the primary antagonists of the series, particularly in Naruto: Shippūden

The Akatsuki; prior to the execution of their plans, at any given time had ten primary members, all of whom are or were S-Class from their respective villages. The Akatsuki always work in teams of two with the exception of Zetsu, who functions as the organization's spy, and make use of their unique skills to the teams advantage. Team members at the very least have to have functional team work with their partner even if they don't like each other. Despite this, it appears the organization hardly ever has a full meeting with them all together, as when they first met at the end of Part I, one said it was the first time in seven years they were all together.

The Akatsuki is widespread, spanning several countries with many agents possibly in all the ninja villages at least once. When one team finds a tailed beasts and has to begin the job of sealing the demon, they have hidden hideouts with many traps ready, to begin the sealing with Pain's astral projection for a three day long jutsu.
Goal

Main Goal: Although some members joined Akatsuki to further their own goals, all are united in Akatsuki's ultimate goal of gaining domination over the Shinobi world. The leader, Pain, has created a three-step process to work their way towards this goal. First, they plan to obtain a large amount of money to support their organization. Second, they plan to set up a mercenary group loyal only to Akatsuki. To build their reputation, they plan to accept any mission below the usual cost and operate off of the excess funds earned in the first part of their plan. Because there haven't been any wars in some time, the established shinobi villages can't afford to charge such low prices, leading the smaller countries to hire Akatsuki over the more expensive shinobi villages. By using the tailed beasts, Akatsuki can start wars and then immediately quell them, solidifying their reputation and convincing every country to depend on them, thus cornering the market in shinobi labor. Without any business, the other shinobi villages will collapse due to a lack of funds. Finally, after Akatsuki is the only major force of shinobi in existence, they can easily conquer the other countries. Members do not automatically learn of the plan upon joining; Hidan did not find out about it until he had been a member for quite some time.

The tailed beasts, nine gigantic demons of immense power, are the focus of much of Akatsuki's effort and screentime within the series. Each Akatsuki member is assigned to capture one of the nine beasts alive or, in most cases, the person that beast has been sealed into. Akatsuki has so far obtained seven of the nine: the first through the seventh tailed beasts.

However, this plan may just be a ruse as Akatsuki's three most prominent members have two separate goals in mind instead of controlling the world; one of which involves world peace.

Madara's Goal: Madara plans on using Akatsuki to gain the Tailed Beasts for himself and use their power to strengthen his Mangekyo Sharingan. In the past he showed great interest in destroying Konoha.

Itachi's Goal: After the Uchiha Massacre and leaving Konoha, Itachi continued to protect the village by joining the Akatsuki and keeping an eye on them from the inside. During his time in the group, Itachi would delay his own attempts to capture the Nine-Tailed Demon Fox, leaked various information about the organization to Konoha, and attempted to kill Madara through Sasuke. Before his death Itachi gave Naruto some of his "power" through a genjutsu, telling him to carry on his goal of protecting Konoha and Sasuke. The "power" that Itachi gave to Naruto remains unknown.

Pain's Goal: Pain later went into further detail on the tailed beasts' role in his plans. The beasts would be used to create a deadly kinjutsu technique that could wipe out one of the five great nations in an instant, so if countries go to war and do not have ninja villages to fight for them they would turn to the Akatsuki and their technique. Whichever side uses the technique first would wipe out the opposing country, which would scare them into never using their weapon again, and scare the other countries to never start a war or they would be wiped out too. Through the mutual fear, war would cease to exist, and the world would know everlasting peace.

This greatly conflicts with Madara's plan so this goal could in fact be a secret goal that only Pain and Konan are aware of.

Akatsuki members have a similar way of dress, which could give them away if a village is alerted of their presence. Members wear long, dark cloaks with red clouds, a red interior, and a chin-high collar. All members wear nail polish of varying colors on their finger and toenails, and may wear a conical straw hat with small spike-like balls hanging down to cover their faces. The hats may be used to move around in the general population unnoticed, or for when the weather requires one.[7] Some members tend to wear their village headband with a scar through the middle to show their defection.

Colors of fingers and toenails are:

What seems to be most important however are their rings. In total there are ten rings given to each of the ten main members of the Akatsuki. It appears these rings are important to being a member of the Akatsuki as when Orochimaru defects, he takes his ring with him[8] and as such wasn't replaced.[9] The rings may be connected to the sealing jutsu used to extract the tailed beasts but it has not been confirmed.
The ring positions of the members
The ring positions of the members

Eight of the ten kanji of the rings are taken from a kuji-in (Nine Syllable Seals): a collection of nine hand postures used in meditation. These kuji-in have found their way into ninja folklore as a kind of magic spells. Pain's "rei" and Zetsu's "gai" are not from this kuji-in. However, the only unused kuji-in kanji, 玄 (gen, "mysterious"), bears a strong resemblance to Zetsu's "gai," suggesting an error. It would be a consistent error, however, since the "gai" kanji has been used in every instance the ring's kanji has been shown, both in the manga and the data books.

Recently, Team Hawk has allied themselves with Akatsuki. They also wear the Akatsuki cloaks, but they seem to have their high collars folded down. None of them wears a headband, nail polishes, nor the rings; of the latter only the Suzaku, Kūchin, and Hokuto are known to be recoverable, whilst the santai worn by Hidan and the Seiryū worn by Deidara were most likely destroyed in the explosions that defeated them 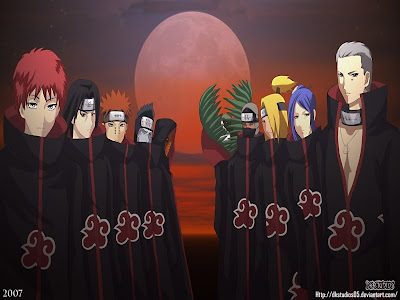