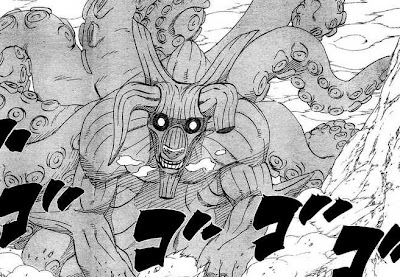 Part II
Hunt for the Eight-Tails

The Eight-Tails is currently one of the two remaining Tailed Beasts that were not extracted by Akatsuki, the other one being the Nine-Tailed Demon Fox.
When Team Hawk arrived to Kumogakure in attempt to capture Kirābī, he battled them to the point of annoyance. With his great control over his demon, Kirābī transformed himself into the Eight-Tails, and proceeded to terrorize Team Hawk. As the Eight-Tails attacked, Suigetsu commanded a wave of water, attempting to defeat it. The Eight-Tails understood that Suigetsu had the advantage given that they were surrounded by water, so it then charged a huge ball of chakra and fired it at Suigetsu, defeating him.

Later, Sasuke Uchiha activated Amaterasu on the Eight-Tails and it fell into pain by its flames. Kirābī then was seemingly captured by Team Hawk and was given to Madara Uchiha. Kirābī's brother, the Raikage, swore that Akatsuki would pay for what they had done.

It was later revealed that Kirābī faked his capture. After Hawk left, he and the Eight-Tails left the lake and went to go see Sabu, the leader of the "Enka ninjas". The Eight-Tails also tells Kirābī that he should stop rapping.

Little is known about the Eight-Tails' strength so far. As the Eight-Tails' host, Kirābī can transform himself into the Eight-Tails and can access to its high-level chakra (possibly almost in the same league as the demon fox's level) without losing control. It has been shown to fire an attack similar to the Four-Tailed Fox Menacing Ball, but with much greater force.

Kirābī is able to use the Eight-Tails to block his chakra to break illusions, even ones cast from a Mangekyo Sharingan.

However, Eight-Tails is shown to get easily annoyed with Kirābī's crazy antics.

An ushi-oni (牛鬼, ox demon) is a creature which appears in Japanese folklore. An ushi-oni is a massive, brutal sea-monster with a head and body of a bull with eight octopus tentacles, which lives off the coasts of Japan and attacks fishermen (pretty much like the Kraken, but with a Minotaur-like body).

An ushi-oni appears as protective symbol in the Ushi-oni-matsuri, which is held in late July in Uwajima of Ehime Prefecture. Like the dragon dancers at a Chinese New Year celebration, an ushi-oni is represented with a huge, multiple-person costume with a cloth body and a carved, painted head held upon a pole. It has a sword for a tail, and is thought to drive away evil spirits.

As most of the other Tailed Beasts seen so far are based upon mythological creatures, it was speculated that this Tailed Beast was based upon the eight-headed and eight-tailed dragon, Yamata no Orochi. Some fans believed that Orochimaru was the Eight-Tails due to his snake-like abilities, however, this was proven false in chapter 408. In chapter 413, it has been confirmed that that the Eight-Tails is a giant bull with eight octopus tentacles for it's tails, which is called an ushi-oni.

The Eight-Tails has only one complete horn, the other is halfway missing. Some fans believe this may be a battle scar left by Kirābī's brother, who was mentioned by Kirābī when Sasuke dodged an attack while Kirābī was under the Eight-Tails' chakra cloak.
at 1:21 AM