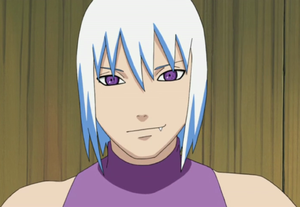 Suigetsu was born in the Village of the Bloody Mist, with powers unique to his clan. Reputed to be the "reincarnation of the Kijin", Suigetsu, together with his brother, Mangetsu, dreamed to inherit the title of Seven Ninja Swordsmen of the Mist. This acted as their motivation to finish cruel missions day by day. However, this dream was later shattered with the premature death of his brother, and Suigetsu changed his ambition to "collecting all of the swords". With the humiliation of being captured by Orochimaru, his ambition was put on hold. Karin later mocked this ambition, angering Suigetsu.

Suigetsu appears to be indifferent, caring only for a few things around him. He spends a considerable amount of time mocking and/or being beaten by Karin, the only female member of Taka. Despite showing initial dislike towards his teammates, Suigetsu has grown fond of them, and was willing to risk his own life to protect them against the Eight-Tailed Beast.

Kisame claims that Suigetsu is a prodigy at the art of murder, as he has a habit of chopping off his victim's limbs before beheading them. Suigetsu, despite addressing him with the honorific term "senpai", wants to defeat him and take his sword, noting to Sasuke that he will one day serve him as "shark fin soup" (a reference to Kisame's shark-like appearance) after Sasuke suggested that he was not yet strong enough to defeat Kisame.

It appears that Suigetsu has a certain love for killing, but he refrains from satiating this desire due to his tacit fear of Sasuke. However, there are several occasions where he has killed people when he believed Sasuke wouldn't notice. Suigetsu has been shown to have thoughts such as "just this one" and "he'll forgive me". This shows the darker side to Suigetsu's personality, and a sign of things to come.

Suigetsu apparently likes to tease animals, as he was seen taunting the talking ninja cats from the abandoned Uchiha warehouse at one point, but lectured Sasuke on treating animals better after Sasuke used Manda to escape Deidara's ultimate self-explosion jutsu, resulting in Manda's death.

Immediately after Sasuke defeated Orochimaru, he went into one of Orochimaru's many experimentation labs and freed Suigetsu, who was sealed inside a holding tube in the form of water. After pointing out that he owed nothing to Sasuke for dealing with Orochimaru, Suigetsu agreed to join him. Once they left, Suigetsu had Sasuke take him to the Land of Waves to retrieve Zabuza's sword from his grave.

In the anime, the story of Suigetsu obtaining Zabuza's sword was expanded and lengthened out slightly for this episode in order to facilitate an earlier display of his abilities. The sword in question was taken from Zabuza's grave by a politician and crime boss named Tenzen Daikoku, who wanted to take the sword as a trophy, and for "revenge" after losing many men during Zabuza's attempted coup years before.

They then went to the base where Karin resided, where Suigetsu was instructed to free all the prisoners. Before releasing them, however, Suigetsu told them to spread the word that Sasuke killed Orochimaru, and would bring peace to the world. As Sasuke hadn't ordered him to say these things, his motives appear to be unclear.

Once Karin was persuaded to join, they headed to meet with Jugo. They had to fight their way through an army of people branded with the Cursed Seals to reach him, and, under Sasuke's orders, were told not to kill any of them whilst subduing them. When they found Jugo, who promptly attacked them, Suigetsu attempted to kill him. However, Sasuke intervened, and threatened to kill both of them if they didn't stop fighting. Jugo eventually calmed down, and, with some persuasion on Sasuke's part, was recruited. Afterwards, Sasuke told them their mission and their new team's name; they would be known as "Hebi", and their mission was to find Itachi Uchiha.

Soon afterwards the team split up, searching for information about Itachi's whereabouts. This led Suigetsu to a bank where Akatsuki member Kakuzu's banker Genji was. Recognizing him as such, Suigetsu threatened him to talk.Seeing Deidara's large suicide bomb's explosion, Suigetsu was drawn to the site of Sasuke's battle with Deidara, where he had used a special seal to summon Manda and had used the snake to escape the explosion. It had, however, been a little too late, and Manda died, making Suigetsu tell Sasuke that he should treat animals a little better.

After they had rested and continued on their way, Sasuke found Itachi in an Akatsuki hideout. The clone of Itachi then guided Sasuke to an Uchiha hideout. On their way there, the group encountered Kisame Hoshigaki, who told them Sasuke must go alone. Leaving Hebi behind, Suigetsu challenged Kisame to a battle, who gladly accepted, while Sasuke finally made Itachi's death a reality. It was later revealed that Zetsu interfered in the fight, leaving both Suigetsu and Kisame alive.

Hunt for the Eight-Tails arc

Hebi, now renamed "Taka", began working with Akatsuki. They went to Kumogakure, and confronted Killer Bee, the host of the Eight-Tailed Giant Ox. Suigetsu attacked him first, but was quickly disarmed. He quickly engaged him again, but Killer Bee's electric attacks left Suigetsu outmatched. To be as useful to his team as he could, Suigetsu immobilized Killer Bee, allowing Sasuke a chance to attack them both. When Killer Bee turns into his beast and tried to use an Eight-Tailed Ox Menacing Ball on the team, Suigetsu used himself as a shield to block the attack. After that, he became a huge water form, with his sword at the core, resembling a cell, and fought single-handed against the unleashed beast. Although he lost and was left unconscious, he managed to gain the time that Karin needed to heal Sasuke, and letting him (Sasuke) use Amaterasu on the Eight-Tails. After the battle was over, Jugo carried Suigetsu away.

While Taka recuperated, Suigetsu recovered in a tank of water. He yelled at Karin for leaving his sword behind, but was later seen to have recovered it. Once healed, Taka set out for Konoha.

As Taka left for Konoha, Madara intercepted them, and informed them about their failure to capture the Eight-Tails, and that the capture of the beast was no longer of interest. Zetsu informed them that Konoha had been destroyed by Pain, and that Naruto Uzumaki had defeated him.

Suigetsu was shocked to hear of Naruto's power, and became even more surprised to hear that Naruto was now most likely stronger than Sasuke. He displayed displeasure when Zetsu guided Taka to the Kage Summit, but Sasuke reassured him of his power.

When they arrived at the Land of Iron, he was sent to spy on the guards, and then came back to report to Sasuke what he had seen.

Suigestu is arguably quite powerful, or at least very confident in his abilities, since he has threatened Sasuke on more than one occasion. Kisame has noted him to be a child prodigy in the art of murder, and that he is practically the reincarnation of Zabuza. Sasuke has noted, however, that he isn't strong enough to beat Kisame yet.


Suigetsu is able to reduce himself to liquid form, and to return to bodily form at will. This ability also allows him to change his body shape, giving him the ability to increase the size of his limbs, thus proportionally increasing his strength if necessary. It also makes striking him somewhat difficult; since he is made of liquid, any regular strike will go right through his watery form. As his body is water, he is also capable of merging with already existing water to increase his attack range, and to use Water Release techniques. Also, when he passes out he goes into a jelly-like state, as seen in the battle against Killer Bee.

Suigetsu is also the first ninja seen carrying water bottles on his outfit. Given his somewhat frequent desire to consume water, Suigetsu may require regular hydration to sustain his watery form. Due to his water-like body, he exhibits weakness against lightning-based techniques, as exhibited in his defense of Sasuke against Killer Bee's chakra-charged strike against Sasuke.

From his training days with the Seven Ninja Swordsmen of the Mist, Suigetsu is quite adept with wielding Zabuza's sword. He can also expand the muscles in his arms to help him wield swords with more ease. However, carrying Zabuza's sword for long distances seems to tire him out, and makes it necessary for him to drink more water. In addition to his own skills, Suigetsu also has a good perception for swordsmanship skills, as he saw Killer Bee was a skilled swordsman almost instantly after the fight began. In an anime-only fight, Suigetsu is also shown fighting hundreds of foes,showing he can fight well even without the sword. He also has the ability to (as seen in the anime) attack pressure points with his hands.
at 10:46 AM