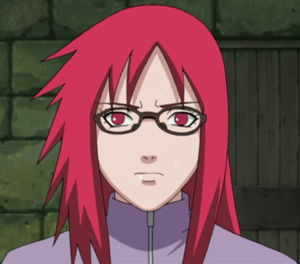 Karin (香燐) is a former subordinate of Orochimaru, who assisted him in his experimentations and was left in charge of one of his bases while he was away. She has red eyes, a matching hair colour, and an unusual hairstyle: her hair is short and unkempt on one side, while long and combed on the other.

Karin lived in a small village that was burnt to the ground during a war. She was the only survivor, completely unharmed. Orochimaru randomly found her after that and asked how she survived, to which she answered that she could tell that huge groups of people were coming. Orochimaru then brought her to Otogakure, where she served as a jailer at one of his bases. Unlike the rest of the team, Karin was genuinely loyal to Orochimaru, going as far as to refuse to release Orochimaru's prisoners, even after his defeat.
Personality

Karin has a fluctuating personality; she will at times appear tough and in control, and at other times will appear highly flirtatious. She annoys Suigetsu, who she attacks whenever he voices his opinion of her.

She, like many girls in Konoha before her, has a huge infatuation with Sasuke Uchiha. Her infatuation, however, is an obsession to the point of fanaticism. For example, when Hebi was resting in a village to take care of the wounded Sasuke after his battle with Deidara, Karin planned to drug Suigetsu and Jugo to "ravage" Sasuke's unconscious body. She later revealed that she had kept one of Sasuke's sweat-drenched shirts. Karin also implied that a team consisting of just her and Sasuke would be much better. Suigetsu indicated that Karin had some history with Sasuke, but this has yet to be elaborated upon. She seems to rate men on their chakra level.

Sasuke recruited her as a member of Hebi. While Sasuke admitted she might be troublesome sometimes, he also noted that her special abilities made her useful. Once the team was completed, Sasuke sent Hebi out in multiple directions to try and locate Itachi Uchiha. While on the search, Karin passed Sakura Haruno, although the two did not acknowledge each other. After Deidara's suicide explosion, the rest of the team regrouped and took Sasuke to an inn to recover. When Karin went out for supplies, she sensed the Eight Man Squad approaching, and warned the team. It was her plan to use Sasuke's old clothing as a means to distract the squad from catching them. When they finally got back on Itachi's trail, Karin stayed behind with Suigetsu, Jugo, and Kisame as Sasuke went ahead to battle Itachi.
Hunt for the Eight-Tails arc
Karin's new look.

Hebi, now renamed Taka, later began working with Akatsuki. They were sent to Kumogakure to capture the Eight-Tailed Giant Ox's jinchūriki. When they found him, Karin stood on the sidelines and watched the others fight Killer Bee. When Sasuke was mortally wounded fighting Killer Bee, Karin immediately rushed to pull the dying Sasuke out of the fight, as Suigetsu and Jugo kept Killer Bee busy. As she pulled the swords out of Sasuke's body she exposed her right arm, riddled with numerous bite marks. She then told Sasuke to bite her arm, and as he did, her chakra healed his wounds.

As Killer Bee got bored and attempted to leave, Karin used her chakra-sensing powers to locate him. Killer Bee then used his demonic chakra to charge at her, Jugo, and Suigetsu, but Jugo rocketed them away to safety. After Sasuke was yet again critically wounded by Killer Bee, Karin tried to revive Sasuke again. She was stopped by Jugo, who claimed she didn't have enough chakra to save Sasuke from such a great wound; so he asked her to help him heal Sasuke. When Killer Bee fully transformed into the Eight-Tails, Sasuke used Amaterasu to quell it. Some of the flames spread to Karin's cloak, and Sasuke used his Mangekyo Sharingan to put them out. Karin was carried to safety by Jugo.


While the team was recovering, Karin was shown to have now changed her look by putting her hair in a ponytail. She noticed that something was wrong with Sasuke, but as he brushed it off, she detected an enemy outside their base, which Sasuke and Jugo went to investigate. After leaving to retrieve Suigetsu's sword, Karin was in recovery (now back to her regular hair style, as well as a new dark-coloured outfit) until Sasuke ordered her to move out to Konoha with the others.

Madara confronted them telling them they failed capturing the Eight-Tails' host. Madara told them that Konoha is already destroyed and that Danzo is a new hokage. Zetsu said Danzo would be at the Kage summit meeting, Sasuke then said he will kill Danzo there. Then White Zetsu shows them where it will be held.

Karin's special ability, the Mind's Eye of the Kagura, allows her to track specific individuals through chakra, seen when she is able to discern that Jugo is not among a crowd of prisoners through the standard concentration pose for molding chakra. It also allows her to pick up chakra from long distances, and notice changes in an individual's chakra. Kakashi Hatake surmised that Karin is a particularly skilled chakra-sensing ninja, as she is not only able to tell that his group is approaching, but can also sense how many of them are present, and that one is a dog. Karin senses can also tell when a person is lying from the fluctuations in a person's chakra from made from dishonest emotions.

Karin also has the ability to heal others by letting them bite her and suck in her chakra. However, it is dangerous for her to use this ability more than once a day. It should also be noted that she had other bite marks on her arms, chest and neck. Which she wears long sleeve shirts to cover up, meaning she has uses this power repeatedly. As a former guard to one of Orochimaru's prisons, it is plausible that Karin is a capable battler, as shown from her effortlessly taking down a prisoner attempting to escape.
at 10:39 AM