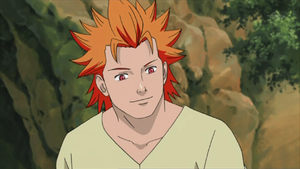 Jugo (重吾, Jūgo), was being held at Orochimaru's North Base, which was also where most of Orochimaru's secret research was conducted. He was recruited as a member of Taka.

Jugo's personality is usually quiet and unassuming, but, when angered, those around him stand little chance of survival. One time, he even became so angry that he devoured an entire village. This has caused a fearful village to label him as the "Scales", where anything could tip the balance. Cursing his existence, he took to secluding himself in caves, hoping to bring no-one any harm. This lasted until Kimimaro came to him, who was himself the last remnant of his own Kaguya clan. Following Kimimaro, Jugo allowed himself to be one of Orochimaru's test subjects. Upon examination, Orochimaru was able to isolate enzymes in Jugo's blood that caused him to transform. By extracting these enzymes, Orochimaru was able to use them to produce similar, but more controlled, effects in other people, leading to the creation of the cursed seal. As time passed, Kimimaro died, then Orochimaru followed him, and Jugo shut himself away once more.

Jugo has a bracket-shaped symbol on his left palm. Whether or not this is also present on his right palm, or if it has any significance, has yet to be seen. He is the tallest, non-animal character in the series who's precise height (202 cm) is known. Jugo wears a black shirt, tan pants, and a blue cloak. After Taka had allied with Akatsuki, Jugo was shown wearing an Akatsuki robe.

While Jugo initially appeared quite bloodthirsty, Karin noted that this was only common behaviour when he was enraged; Jugo himself didn't want to kill anyone. Jugo's fits of rage are random, and thus, the reason why he willingly remains confined. The only reason he agreed to go with Sasuke is because he views Sasuke as the only person capable of preventing him from killing people while enraged, by the means of killer intent or the Sharingan. Before Sasuke, it was Kimimaro who kept Jugo in check, and as Kimimaro was the only person Jugo came into any contact with, the two grew close. After hearing that Kimimaro sacrificed his life to deliver Sasuke to Orochimaru, Jugo believes that Kimimaro's spirit continues to live on in Sasuke.

Suigetsu can't stand Jugo, and commented that one of the reasons he had to retrieve the Decapitating Carving Knife was because of him. Karin noted that Jugo is mentally unstable, a view confirmed when Jugo was muttering to himself over who he would kill next, which he would determine by gender. While discussing Sasuke Uchiha's team with the other members of Akatsuki, Pain referred to Jugo as "Jugo of the Scales" (天秤の重吾, Tenpin no Jugo), referencing his dual personality. The English manga used the term "bipolar Jugo", obtaining the same effect.
Part II
Hunt for Itachi arc

After defeating Orochimaru, and recruiting Suigetsu and Karin, Sasuke Uchiha travelled to Orochimaru's North Base, to recruit Jugo. Initially unwilling to join forces with Sasuke, Jugo tapped into his Cursed Seal, but was then frightened into releasing it by Sasuke's killer intent. He then joined the newly formed Hebi in their mission to hunt down and kill Akatsuki's Itachi Uchiha, Sasuke's older brother.

Jugo would later discover multiple hidden bases belonging to the Akatsuki, where Sasuke confronted a clone of Itachi in one of them, who challenged Sasuke to meet him at the Uchiha Clan Stronghold. Jugo remained behind with the other members of Hebi and Kisame Hoshigaki as Sasuke confronted Itachi.
Hunt for the Eight-Tails arc

After Itachi's death, and Sasuke's "education" in his brother's true past by Madara Uchiha, Jugo and the other members of Hebi were reformed into Taka. Having allied themselves with the Akatsuki, Taka was sent to capture the Eight-Tailed Beast, so that it could be extracted from its host, Kirābī. Infiltrating Kumogakure, they confronted Kirābī, only to have him defeat Suigetsu. When Jugo attempted to defeat him as well, Kirābī overpowered him using the sword Suigetsu had wielded, which originally belonged to Zabuza Momochi. When their team started working together, Jugo concentrated on removing his teammates from danger.

After Sasuke was critically injured, Jugo tells Karin that she did not have enough chakra to heal him and starts to infuse some of his flesh with Sasuke, to heal his wounds, saying it would work as he was compatible for his cursed seal. This however somehow reduced him to a younger appearance. Sasuke was eventually able to capture Kirābī, and Jugo recuperated with the rest of Taka.
Five Kage Summit arc
Taka heading to Konoha.

As Taka rested in one of Akatsuki's hideout, Karin sensed a spy had followed them. Jugo and Sasuke went and intercepted him, and left the hideout for a new one shortly after. Taka later set out for Konoha. On their way they were interceptd by Tobi who informed them that Konoha had been destroyed and later it was explained by Zetsu, who suddenly appeared, the circumstances of the destruction and that a man named Danzo had been named Hokage

As per Tobi's advice and orders Sasuke changes their goal to the Kage Summit and Team Taka is then guided by Zetsu, who had split up into two bodies.

Jugo and the rest of Team Taka arrived at the Land of Iron, and after Suigetsu scouted the area and reported there are many guards, Sasuke tells Jugo to use animals to find the least guarded route.
Abilities
Cursed Seal
Jugo showing off his powers.

His brief fight with Sasuke and Suigetsu revealed that Jugo can control his transformation, unlike the static effects of a standard Cursed Seal. When battling Sasuke, he changed his left arm into a piston-like ram to increase his punching power, and then altered it into a massive blade from his forearm to fight Suigetsu. He is also capable of doing only a partial transformation, invoking a level two form over one portion of his body without completely changing. Also, since Jugo is the very origin of the Curse Seal, he is able to use it to its full extent without it eroding his body. He also refers to people with a Curse Seal as a Copy of him.

Jugo's other personality is able to throw people by using his arm and releasing chakra out the other direction. This can also be used for escaping, charging right out of the battle with great speed.

He can also fuse part of his body, while in Cursed Seal form, to replace parts of other Cursed Seal-infected people's bodies, as he does to Sasuke. However, the downside to this appears to be it reverts Jugo to the appearance of a child.

Finally, Jugo is able to understand animals, such as birds, using them as scouts and to help him accomplish tasks.