The Sharingan (写輪眼; Literally meaning "Copy Wheel Eye", Meaning (Viz) "Mirror Wheel Eye") is a Kekkei Genkai, which appears in some members of the Uchiha clan of Konohagakure. Some think that it was derived from the Byakugan many years ago. It allows the user to comprehend the attack of an opponent almost before the attacker knows what attack they are making. The Sharingan also allows the user to see the flow of chakra within a person, but to a lesser extent than the Byakugan.
Stages

It's possibly derived from the Byakugan, though it has a different set of abilities.

The Sharingan's first and most well known ability is to memorize any technique that it witnesses. It can memorize Ninjutsu, Genjutsu, and Taijutsu with perfect accuracy, allowing the user to use the techniques as his own. In order to reproduce copied jutsu, however, one must have the necessary skill or ability to perform them. A prime example is Rock Lee's brand of Taijutsu. While Sasuke was able to copy some of Lee's moves, they put a much more significant strain on him since he hasn't trained physically nearly as hard as Lee has. In addition to physical skill, the Sharingan cannot allow the user to reproduce other Kekkei Genkai since the Sharingan user doesn't possess the same genetic trait. Additionally, Sharingan users cannot summon a creature which they have not made a contract with.

The Sharingan also grants the user incredible clarity of perception, allowing them to track fast-moving objects with ease and even predict the subsequent movements of those objects. The ability to track and predict movement is largely based on individual skill, as unskilled users have much more trouble tracking fast-moving objects. A fully-evolved Sharingan eye can track all but the quickest opponents, even if the user can't move at the same speed, (so even if the user can follow his or her opponents movements it doesn't necessarily mean their body will be able to react fast enough even though they saw the attack coming). This perception is also great enough to see through Genjutsu, depending upon the skill of the user, and the ability to observe the movement and flow of chakra, but not to the same extent or clarity as the Byakugan. Another ability of the Sharingan is the ability to see chakra as color, even through other objects. For example when Sasuke fights Deidara, he can see Deidara's bombs hidden under ground because of their chakra. Additionally, the Sharingan grants the user exceptional analytical powers, allowing them to instinctively pick up on various visual clues with little difficulty. In one instance, Kakashi had to shut his eyes to avoid accidentally reading Naruto's lip movements while he was spoiling the ending of one of Kakashi's Icha Icha books. Sasuke was also able to reproduce answers on another person's test by watching their pencil movements during the Chunin Exam.

The Sharingan also is capable of a unique brand of hypnosis that involves suggesting actions and thoughts to the opponent through simple eye contact. When used in conjunction with the other aspects of the Sharingan, this allows the user to perfectly mimic every move their opponent makes, even before they do, making it appear as if the user can see the future. More advanced Sharingan users can take the hypnosis ability even further by tricking or even trapping their opponent within an illusion. The potency of the Sharingan's illusion is dependent on the user's knowledge and skill with implementing Genjutsu.

It is possible to transplant Sharingan eyes from one person to another, as occurred with Kakashi and his deceased comrade Obito Uchiha. However, transplanted eyes do not work as well in a non-Uchiha body, causing more strain on the user, as is the case with Kakashi (extended use of his Sharingan will cause him to collapse). Uchiha clan members are not burdened with this weakness; while activation of the Sharingan does consume chakra, the drain is so small as to be significant. Itachi in particular seems to have no trouble keeping his Sharingan activated near-constantly.

Transplanting the Sharingan eyes from a living or deceased Uchiha is the only way to avoid the loss of sight over time from the Mangekyo Sharingan.

Characters who possess the Sharingan

Characters who currently possess the Sharingan include Sasuke Uchiha, Kakashi Hatake, and Madara Uchiha. Kakashi's eye was given to him by Obito Uchiha, one of his teammates in his original three-man ninja team. Obito developed it in a battle against a camouflaging Rock shinobi.


Main article: Mangekyo Sharingan The Mangekyo Sharingan (万華鏡写輪眼, Mangekyō Sharingan; Literally meaning "Kaleidoscope Copy Wheel Eye") is a heightened form of Sharingan. The Mangekyo Sharingan is distinguished from a normal Sharingan through its appearance, which changes the form of the tomoe seal. The appearance differs from user to user; Kakashi's and Itachi's both resemble pinwheels, Madara's and his brother's more look like more detailed forms of the basic three-tomoe Sharingan, and Sasuke's looks like a star.

The normal eye for an Uchiha clan member resembles any normal human eye with iris, pupil and sclera.

This is the first variation of a partially developed Sharingan eye. The clan members pupil will turn red and develop one of the wheel swirls. When Uchiha Sasuke finally activated his Sharingan, his left eye took this form.

This is the second variation of a partially developed Sharingan eye. The clan members pupil will turn red and develop two of the wheel swirls. When Uchiha Sasuke finally activated his Sharingan, his right eye took this form.

This is the final normal form of the Sharingan eye. The clan members pupil will turn red and develop three of the wheel swirls in both eyes. In this form the clan member can read Genjutsu, Taijutsu and Ninjutsu, learn how the skill is done and then copy it to be used later. This form can also initiate the Mangekyou "Kaleidoscope" form.

This is the rare Mangekyou (Kaleidoscope) form which is said to only appear in a few Uchiha members. Uchiha Itachi was able to finally master this form during the period he killed his clan. In this form Itachi is able to use the Amaterasu and Tsukuyomi Doujutsu techniques.

This Mangekyou Sharingan form was revealed by non-Uchiha clan member Hatake Kakashi. Whether this form is due to Kakashi or some inheritance from what Uchiha Obito was capable of is unknown. Using the eye, Kakashi can use a technique which appears to collapse space in around a focus point and transport it to another location.

This Mangekyou Sharingan form was attained by Uchiha Madara. After developing the Sharingan, Madara and his younger brother trained against one another and eventually awakened their own version of the Mangekyou. The use of these eyes increased the brothers' strength and allowed them to take over leadership of the clan. Unfortunately the usage of the eyes lead Madara to lose his vision.

This Mangekyou Sharingan form was attained by Uchiha Madara's younger brother. After developing the Sharingan, both brothers trained against one another and eventually awakened their own version of the Mangekyou. The use of these eyes increased the brothers' strength and allowed them to take over leadership of the clan.

Unable to accept being blind, Madara did everything he could to regain his vision. A desperate Madara eventually removed his brother's eyes to use as his own. As a result, Madara awakened a new more powerful set of eyes which allowed him to see the light once again. This new eye form would combine the look of both he and his brother's Mangekyou Sharingan.

This was showned at Naruto Chapter 402 "LAST WORDS".

Parts of the Eye and Sharingan theory

All right, now first let’s go a little more in-depth into what the eye is made of. The retina is a sheet of receptors at the back of the eye and is made up from two types of photoreceptor cells; rods and cones.
Rods detect light levels, which means they only pick up black and white images. In humans, these are more common near the edge of the eye. Now, there is only a limited number of space for rods and cones in the retina, so if you increase the count of one you have to decrease the count of the other.
Essentially, you must trade color perception for more detailed perception in black and white, which is largely what enables us to perceive motion.
Does that make even the least bit of sense? No? Crap, all right, how about rods detect motion and cones detect color, is that more understandable?
Okay, now since you can’t really increase the sensitivity of a rod, you would have to increase the number of them. One way is to severely decrease the number of cones. Well, this won’t work without sacrificing color, and Uchiha’s don’t seem to be colorblind typically, so that must not be it.
Another way is to make the retina bigger, but in order to get to the level Sharingan is you’d have to have pretty damned big eyes. 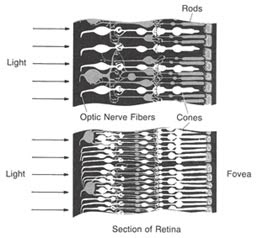 A: Ability to see color.
1: Motion perception.
2: Copies all motion perceived.
3: Prediction motion- inferring through rational physics the action about to take place.
B: Ties pupils together for the ability to understand what one sees without getting confused. Without it, you would have three different eyes looking in three different directions and no idea what to focus on or what’s going on.

Hypnosis and Subliminal Messaging of the Sharingan

As for the hypnosis and subliminal messaging, that’s probably from watching the eye spin- have you ever had someone turning a spiral in front of you and speaking softly? It works if one knows what they’re doing, so I’m gonna chalk it up to possible- after all, I’ve said it before and I’ll say it again- I don’t know what chakra can do, so who’s to say it wouldn’t work?
That’s all I have on that, although I also have a report on the genetic probability of a Byakugan-Sharingan hybrid, but I’ll stop here for now.
Keep in mind, once again, that this I did for fun; I in no way, shape, or form own any of the characters or abilities mentioned here in this, nor even any of the pictures used. All of the report is purely hypothetical, and should not be taken literally.