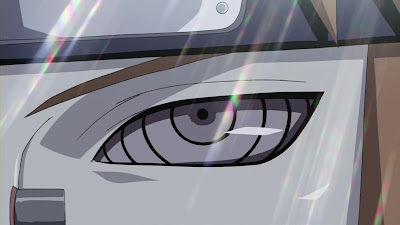 The Rinnegan (輪廻眼; Literally meaning "Samsara Eye") is the most powerful, revered and supreme of all the three main eye techniques (瞳術, dōjutsu). The Rinnegan is characterized by a number of concentric circles around the pupil of the user. It has recently been revealed that in addition to allowing an individual to quickly master various jutsu, the user may also use all six forms of nature manipulation. Like the Sharingan and Byakugan do, the Rinnegan also allows the user to sense chakra, including an otherwise hidden barrier. It was first possessed by the Sage of the Six Paths (六道仙人, Rikudō Sennin), said to be the founder of the ninja world and the creator of the first ninjutsu. Currently, the eyes are possessed by Pain. Since the Rinnegan gives the user the ability to use all six chakra types Pain could possibly be able to use all types of ninjutsu and even techniques from the Yamanaka Clan.

Pain uses the Rinnegan in his fight with Jiraiya, summoning a total of six bodies that all possessed the Rinnegan. It has also been shown during Pain's invasion of Konoha that these bodies are all those of dead shinobi which Pain controls via the mental chakra receivers that are seen protruding from the faces of all the bodies he controls. Each of these bodies has total mastery over one ninja art, whether it be the summoning technique, ninjutsu, genjutsu or taijutsu. An ability gained by using the Rinnegan is that all the bodies can see each individual body's field of vision. Because of this advantage, one must be blinded in order for a blind spot to be opened. Pain also managed to summon numerous animals each possessing the Rinnegan and presumably sharing their sight.

Contrast to the anime depiction of it being multi-colored, the manga has shown that the Rinnengan actually is grayish purple in color. This mistake was most likely done due to the manga not releasing the color in time for the anime. This error was corrected as of episode 80 of Shippūden.