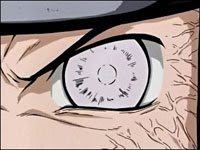 The Byakugan is a genetic trait that is shared amongst the members of the proud Hyuga Clan. Those that inherit the blood of this clan have almost featureless white eyes, which are the focus for many of their dojutsu. Although it is not stated directly in the manga, it is presumed that all members of the Hyuga family possess the Byakugan. It is a common, but not proven belief that the Sharingan is a genetic offshoot of the Byakugan.

Hinata and Neji Hyuga are two main characters who use the Byakugan.

The Byakugan, as stated above, is the primary focus of the Hyuga's special arts. After awakening the Byakugan, which is denoted by tensed veins originating from the upper cheek to the temple leading to the user's eyes, the Byakugan allows for the user to see with near 360º vision, meaning that they can literally see everything around them, except for one blind spot above the spine and under the head which differs from user to user. They also have the ability to see through solid objects, and can use a degree of telescopic sight. The distance and the degree of telescopic sight varies from person to person. In Part I, Neji Hyuga was able to see an area of 50 meters, but later he increases his visual range to 1000 meters. During the hunt for either of the Uchiha brothers, Hinata was shown to be able to view Amaterasu's flames and the chakra in the area from ten kilometers away.

However, one of the greatest uses of the Byakugan is the ability to see the chakra circulation system inside of another's body. The Byakugan has also shown the ability to see what a person's chakra type is, by looking into someone's chakra points. It is from this particular ability that they are able to employ their ultimate attack style: Gentle Fist or Jyūken. Much in contrast with typical Taijutsu style of goken, or ferocious fist, which is focused on external injuries like arms and legs, the Gentle Fist style focuses on internal injuries. Each strike, when placed correctly, strikes along the keirakurei, which is the network of vessels that carry chakra. This network is closely intertwined with the functioning of the body's organs, and so when the keirakurei take damage, the organs suffer as well. The Byakugan is the dojutsu most suited to the Jyūken style, since its vision can penetrate the body. There is no defense against the Gentle Fist, since one cannot train one's internal organs to become stronger. The only possible defense is to stop the Gentle Fist's hits from connecting.

Particularly skilled users of the Byakugan, which appear only rarely, such as Neji Hyuga, can take the Jyūken attacks one step further. Along the keirakurei are 361 pinprick-sized nodes called Tenketsu, or chakra points. When struck, these tenketsu will seal off, which close the opening points from which chakra is emitted. The Chunin exam fight between Neji and Hinata is an example. Thus, with precision, all those points along the victim's body can be sealed, stopping the chakra flow to those areas. Most of the Hyuga clan cannot even perform this because the Tenketsu are too small to see. Neji Hyuga is the rare exception, having taught himself the ultimate Hyuga technique, Eight Trigrams Sixty-Four Palms. Able to strike without force, and yet do more damage to a ninja than some of the most powerful Ninjutsu, the Gentle Fist is the greatest Taijutsu style known in all of Konoha. Neji Hyuga knows a more powerful technique Eight Trigrams One Hundred Twenty-Eight Palms. And as to even further surpass that technique, Neji has also perfected another technique known as the Eight Trigrams Three-Hundred-Sixty-One Style.