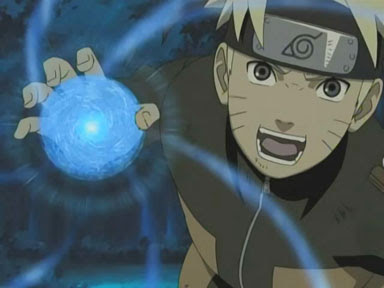 The Rasengan is a technique invented by Minato Namikaze, the Fourth Hokage, after three years of development, it was never completed. The Rasengan was meant to be an example of nature manipulation as Minato meant to combine his chakra element with the Rasengan. However, he died before he could accomplish this. Despite this, the Rasengan is still a very useful, difficult to learn, jutsu. As Jiraiya trained Naruto how to use it, learning the Rasengan was broken into three steps. The first was to burst a water balloon by spinning the water inside in multiple directions at once using only the user's chakra, which emphasizes rotation. Then the user needs to burst a rubber ball, and since rubber is thicker and air is completely different from water, it forces the user to use denser chakra to break it, this step emphasizes power. The last is to combine steps one and two by spinning chakra inside a balloon without moving the balloon itself, emphasizing stability of the sphere shape.

The Rasengan doesn't use any hand seals, it relies only on the chakra control of the user, and once it's complete, it becomes self-sustaining, which does not give Rasengan a definite limit of use like its counterpart, the Chidori. The chakra spinning at such a speed and compacted into such a small state allows the spinning chakra to grind whatever it comes in contact with, causing major damage to it. When used on a person, it has been seen to grind into them, eventually blasting them back. In addition to this, it can also incapacitate the person it comes in contact to.

While the Rasengan is a one-handed technique; in Part I, Naruto has to use two or more hands to use it (although in episode 112, he almost creates a Rasengan with only one hand, while in the manga version he is using three hands, but fails due to Jirobo draining his chakra), mostly due to his poor chakra control. He requires the use of his own hand to release and spin the chakra, and a shadow clone's hands to form the shell of the sphere. When he goes into his one-tailed transformation, he was able to make a Rasengan using his hand to spin and the Nine-Tailed Demon Fox's chakra shield to create the shell. Because he mixed it with the demon fox's chakra, the Rasengan had a purplish glow, making it equal in power to Sasuke's Flapping Chidori. The Rasengan can either be handheld or float slightly above the user's hand; Naruto has been shown to hold it both ways on different occasions, although it is now usually the latter.

While in training, Naruto improved the Rasengan with the Great Ball Rasengan, after Jiraiya pointed out during their time away from Konohagakure that it would be easier to hit an opponent with a larger Rasengan. Later, Naruto mixed his Wind natured chakra to start developing the Wind Release: Rasengan as it was originally intended.

In manga chapter 428, Konohamaru reveals that Naruto taught him the Rasengan before he left for his advanced training with Jiraiya.
at 9:59 PM