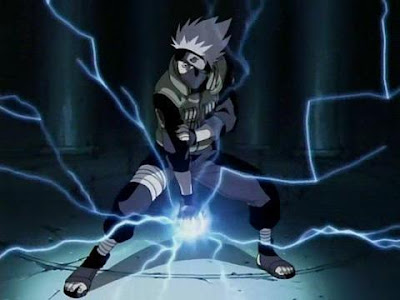 Chidori is Kakashi's only original technique, though he now uses an S-ranked version known as the Lightning Blade. He created it around the time he was promoted to Jonin, and later taught it to Sasuke. This jutsu channels a large amount of chakra into the user's arm. The amount of chakra is so great that it becomes visible to the naked eye. The technique actually alters the nature of the user's chakra, effectively converting it into electricity. As a side effect of the conversion process, the large amount of chakra, and the speed at which the user moves, this technique makes a loud noise similar to many birds chirping, hence the name (if the user is not in motion, it merely makes an electric crackling sound). Once the technique is completed, the user charges forward and stabs their enemy with it. The amount of speed, concentration, and chakra, allows the user to stab through almost anything; as such it is usually fatal to the enemy. This technique is classified as an assassination technique because of the speed at which it is performed, despite the loud noise it produces.

This jutsu has a major drawback, however. The speed at which the attack must be done, combined with the fact that the user must run in a straight line, causes a tunnel vision-like effect for the user. This allows their enemy to easily counter the attack, making it a potentially lethal move for the user. Though this drawback would seem to make learning the technique fairly pointless, Sasuke and Kakashi are able to avoid the drawback because of their Sharingan eyes, which take in every detail regardless of how fast the user is moving. As an additional drawback, the large amount of chakra required limits its use to a few times a day (two for Sasuke, four for Kakashi). Sasuke can manage one more than normal with the use of his cursed seal. Should the user attempt to go beyond their limit, all of their chakra will be drained and their very life force could go along with it, killing them. An additional problem, though not necessarily a debilitating one, is the fact that the large amount of chakra can also injure the user's hand if they put too much force into the attack. Sasuke does this while battling his brother, Itachi Uchiha, causing some of the skin to peel from his hand and leaving it slightly smoldering after the attack was finished.

Naruto also wanted to learn it, but since he does not have a Lightning affinity and lacks the Sharingan eye, this was impossible. Instead, Jiraiya convinced him to go with him to find Tsunade by offering to teach him a jutsu that he claimed was "stronger than the Chidori," which is later revealed to be the Rasengan.

In Part II, Sasuke has mastered the principles of lightning manipulation and developed a number of other Lightning Release jutsus, most of which are derived from the Chidori.
at 9:56 PM