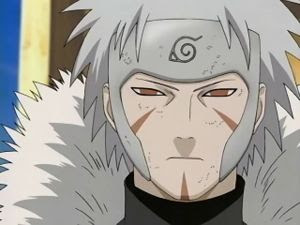 Tobirama Senju (千手扉間, Senju Tobirama), the Second Hokage (二代目火影, Nidaime Hokage; Literally meaning "Second Fire Shadow") is the younger brother to Hashirama Senju, the First Hokage and Tsunade's grand uncle. Like his brother, Tobirama was a member of the Senju clan. He is also the former teacher and team leader of the disbanded Team Tobirama. He is greatly known for his abilities with Water Release Ninjutsu being able to use high level water jutsu with no water source nearby.
Background

Tobirama was the brother of the First Hokage, Hashirama Senju, and part of the Senju clan. 80 years prior to the current era, the world was in a time of war and the ninja clans were nothing more than assassins for hire for the various feudal lords. Because of his brother, the Senju clan was constantly being hired for wars and in turn the enemy would then hire the Uchiha clan. However, Hashirama soon found it meaningless to continue fighting and offered the Uchiha clan a truce - something that their leader, Madara Uchiha was reluctant to agree, but was pressured into accepting by his own clansmen.

Eventually, the allied Senju clan and Uchiha clan would make a pact with the feudal lord of the Land of Fire and the Tobirama would together with his brother and Madara foster the village Konohagakure, and helped create the "one village per country" rule that would eventually end most of the wars between the feudal lords, but their armies were still maintained at current level by the five great shinobi countries after the first ninja war. However there were still internal struggles and after the fight between Madara and Hashirama, the villagers soon began suspecting the Uchiha clan of treason and plotting against the village, but Hashirama, taking the Uchiha clan's word, chose to do nothing.

During this time would Tobirama also trained a three person team of his own, called Team Tobirama consisting of Hiruzen Sarutobi, the future Third Hokage, and Homura Mitokado and Koharu Utatane, the two future elder advisers of the village.

However the war still waged on, and unsure of the title of Hokage, Hashirama would appoint his brother as the Second Hokage and later Tobirama would also appoint his prized student, Hiruzen to be the Third Hokage.

After becoming the Hokage, Tobirama would give the Uchiha clan a special position as a sign of trust. He gave them the leadership of the Konoha Military Police. However (according to Madara) this was just a cover up, and its true purpose was just to distance the Uchiha from the government of the village, and place the clan under a tight surveillance under the ANBU.

Like his brother, Tobirama had a true loyalty to his village and believed strongly in peace. He too would eventually die in the wars, and pass on the title of Hokage to his student Hiruzen.

He was hailed for being the greatest master of Water Release jutsu, being able to create water from nothing, allowing him to use any water jutsu without requiring a water source. However, it has been speculated that he was just gathering the water vapor in the air to fuel his all powerful jutsus. It must be noted that even if this was the case the sheer quantity of water needed would necessitate gathering moisture from a very large area. Such a feat would be just as impressive as creating water from nothing.

Beyond his formidable ability to create (or gather) water his prodigious skill with water jutsu also extended to cutting out a significant portion of the hand seals used to mold a jutsu. For example the Water Release: Water Dragon Blast Technique usually requires the largest amount of hand seals ever seen in the Naruto Universe, 42 hand seals, however he is shown to only require one hand seal.

Also, during his fight against Hiruzen, in the anime only, he displays great abilities in manipulating water, such as using it for projectiles, or tentacles to drag the opponent down in the water. He also displayed tremendous taijutsu and genjutsu prowess.

In an anime filler arc, it was said that he wielded the Sword of the Thunder God (雷神の剣, Raijin no Ken)), a blade with electrical abilities.

He is later revived from the dead by Orochimaru using Impure World Resurrection to fight Hiruzen during the Destruction of Konoha arc. His soul is eventually sealed into the stomach of the Death God, along with his brother and Orochimaru's arms.
at 11:43 PM