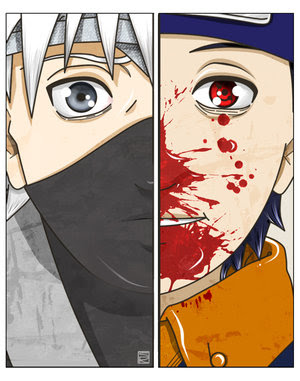 Kakashi Gaiden is a manga that tells the story of Kakashi Hatake who has just been given the rank of Jonin.

Taking place in the Third Ninja War, it consists of a mission in which Kakashi's cell, led by the jonin-ranked Minato Namikaze heads to the Land of Rock to destroy a vital bridge for the Leaf Village's cause.
Kakashi's Past

This manga explains several quirks of Kakashi, including how Kakashi gained the Sharingan, why he has a permanent scar over his left eye, and, most of all, who and what Kakashi was talking to and about in the short scene at the kunai-shaped monument after the Invasion of Konoha arc. 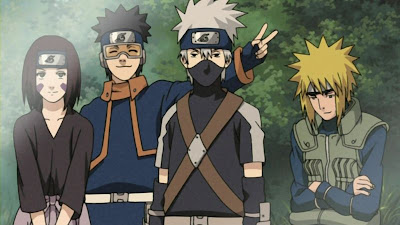 The story surrounds a 13 year-old Kakashi Hatake, who embarks on a mission with his team, which includes another boy named Obito Uchiha, from the same clan as Sasuke Uchiha, a medic kunoichi named Rin, and their teacher, Minato Namikaze, the future Fourth Hokage. They were first seen in the team portrait from flashbacks at the conclusion of the Chunin Exam arc.

This arc answers many questions about Kakashi's past. It is learned how Kakashi receives his Sharingan, the identity of Obito, and when Kakashi became a Jonin. It also gives a first glimpse of who Minato was when he was still alive.

In the midst of the Third Great Shinobi War, at a meeting to hear their new mission, Kakashi receives gifts for advancement to Jonin; a special kunai from Minato and a medical pack from Rin. His other teammate, Obito, in addition to being late, supposedly from helping an old woman, has forgotten a gift and becomes annoyed at Kakashi when he dismisses him as useless. Obito boasts that once he awakens his Sharingan, the kekkei genkai of the Uchiha clan, he will surpass Kakashi. Minato tells his team their mission: they must travel through the Grass Country in the midst of a conflict between Iwagakure and Konohagakure to destroy a bridge. Along the way, the Konoha ninja notice that they are being watched from the trees by Mahiru, an Iwagakure ninja. Kakashi sees this as a good time to use his new jutsu, the Chidori.

Kakashi bolts away to attack their hidden foe. Mahiru, however, uses the Shadow Clone Technique, creating multiple identical clones of himself that Kakashi uselessly attacks. Mahiru uses the mayhem to attack Obito, who is paralyzed by fright, but Minato rescues him from harm. Meanwhile, Kakashi is attacked by the real Mahiru, who buries his katana deep into Kakashi's right shoulder. Kakashi narrowly escapes death with a timely diving tackle by Minato, who attaches a special tag onto the Mahiru's foot in the process. Assured of the team's well-being, and having transported them a safe distance away, Minato leaves Rin to care for Kakashi's wound, and instantly transports behind Mahiru. Mahiru is shocked to have faced "The Leaf's Yellow Flash" (木ノ葉の黄色い閃光, Konoha no Kīroi Senkō?), and before he dies regrets that he did not obey the "flee on sight order" in regard to his foe.

Minato returns to find the team at each others' throats, with Kakashi calling Obito a coward for hesitating on the battlefield. Minato tells Kakashi to never again use the Chidori, because of its inherent flaw: Kakashi's eyes are not fast enough to see his opponent's counter, leaving him in great danger. After criticizing Obito for speaking without thinking, Minato decides that rest is in order. Disturbed by the day's events and Kakashi's abrasive behavior, Obito is unable to sleep and seeks out Minato to ask him why Kakashi acts the way he does. Minato tells him of how Kakashi's legendary father, Sakumo Hatake, also known as "The Leaf's White Fang" (木ノ葉の白い牙, Konoha no Shiroi Kiba?), killed himself after the village looked down on him for rescuing his teammates rather than completing his mission. From that point forward, Kakashi adopted a mentality strictly adhering to the rules of the shinobi, which stressed the elimination of emotions and utter concentration on completing one's mission. Minato then urges Obito to try to understand Kakashi.

After Rin uses her medical abilities to heal Kakashi's wounds, Minato tells the team that they have to split up. Minato heads off alone, leaving the group to be led by Kakashi. Kakashi then leads his team further into Rock territory to accomplish their objective. Two Iwagakure ninja, Kakko and Taiseki, appear and ambush the trio. They manage to capture Rin and flee. Obito tells Kakashi he is going after Rin but Kakashi, as the team leader, decides that they should complete their mission without detouring to protect a friend. Obito then hits Kakashi, telling him his father was a true hero when he decided to protect his friends. Obito then goes off on his own to save Rin while Kakashi walks the opposite way.

Obito Uchiha with the Sharingan

Minato arrives to help the outnumbered Konoha ninja in battle by using his Flying Thunder God Technique to decimate the opposing army. Elsewhere in the Land of Grass, Obito's words press heavily upon Kakashi's conscience, while Obito finds where the Iwagakure ninja are hiding Rin. But as Obito plots his plan of action, Taiseki, having observed Obito's entrance, sneaks behind Obito using an invisibility jutsu. Before Taiseki is able to strike Obito, Kakashi arrives, initially claiming that he believed that Obito could not handle the situation on his own. He successfully deflects an otherwise fatal attack against Obito, but loses his left eye in the process. Obito is scared and begins to cry, but eventually focuses and activates his Sharingan for the first time. Using it, he is now able to see his invisible attacker and kills him.

Kakashi bandages his eye and he and Obito approach a cave to save the weakening Rin from Kakko, the remaining Iwagakure ninja. Using their skills and teamwork, they strike Kakko and save Rin. However, the battle has weakened the cave and in a last ditch effort to destroy the young shinobi, Kakko causes the cave to crumble in upon itself. With rocks falling all around the Konoha ninja, Obito throws Kakashi out of the way of a falling rock, trapping himself instead, and crushing the entire right side of his body. Mortally wounded and knowing his life is over, Obito tells Rin to remove his remaining eye and offer it - along with the Sharingan - to Kakashi as a belated present and final gift to Kakashi for being promoted to Jonin. Kakashi begins to regret his previous attitude, believing himself unworthy to lead the group, but Obito tells Kakashi he is a great ninja and that he can become Kakashi's eye and help them all live on. A short time passes and Kakashi emerges from the rubble a holder of the Sharingan.

When Kakashi emerges he attacks Kakko and manages to kill him using his fully perfected Chidori. More Iwagakure ninja arrive and cause a further cave-in. Rin and Kakashi are forced to leave Obito behind as the rubble envelops him. Angered, Kakashi goes to fight his opponents. He activates his Chidori and prepares the special kunai given to him by Minato. Before the enemies attack him, Kakashi throws the kunai and then passes out due to a lack of chakra. Kakashi awakens to find their enemies defeated and Minato beside him. Minato explains that the special kunai he gave Kakashi alerts him when it is thrown. Minato then apologizes for not arriving sooner. The remaining team members cherish their memories of Obito and go on to destroy the bridge. From that point forward, Kakashi would become famous amongst all the five countries as "The Copy Ninja," thanks to the gift Obito had given him. It is also revealed that in the years that followed, Kakashi became more like Obito, losing track of time looking at Obito's name on the memorial and giving excuses that were similar to the ones Obito gave, and adopting Obito's belief that teamwork takes priority over following the rules. Kakashi visits the memorial stone located near the training grounds every morning in Obito's honor, making him late for almost everything except for the few main important events.