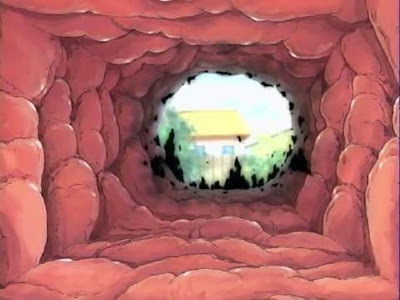 Amaterasu is an Eye Technique of the Mangekyo Sharingan. It is one of the most powerful ninjutsu in existence, opposite of Tsukuyomi, a genjutsu of similar power. Itachi Uchiha was the first person shown in Naruto that could use Amaterasu. He later gave the power to Sasuke Uchiha. The jet-black flames are said to be as hot as the sun. Since the Mangekyo Sharingan is necessary to be able to use this technique, not many have learned it. All that is known is that it is extremely powerful since it can punch through Jiraiya's Summoning: Toad Mouth Bind, which Jiraiya states to be fire retardent. Not surprisingly, it appears to use a large amount of chakra. Though stated in the databook to burn everything reflected on its retina, Zetsu also commented that the Amaterasu burns everything within Itachi's wide field of vision to cinders with an unholy black flame, to the degree of being able to burn an entire forest or village with it. As long as the user keeps the target within their eyesight, this technique is unavoidable.
Itachi using Amaterasu against Sasuke
Itachi using Amaterasu against Sasuke

During the battle between Itachi and Sasuke, after Sasuke escaped Tsukuyomi, all genjutsu between the brothers became pointless. Itachi was forced to shift from his most powerful genjutsu to his most powerful Ninjutsu. As opposed to Tsukuyomi which originates in Itachi's left eye, the Amaterasu comes from his right eye. Although not shown in it's entirety when used while escaping Jiraiya, in the battle with Sasuke, Itachi's eyes were strained to the point that he drew tears of blood while executing Amaterasu.

When Sasuke met Madara Uchiha, Itachi's Mangekyo Sharingan automatically used Amaterasu. Madara later explained that Itachi had implanted Amaterasu in Sasuke's eye to detonate upon seeing Madara's Sharingan. Sasuke uses his own Amaterasu while fighting Kirābī, but uses his left eye as opposed to Itachi using his right. Like Itachi's, his eyes begin to bleed as well. After Karin is accidentally hit with Amaterasu, Sasuke uses his right eye to suppress the flames, and does the same with Kirābī.
[edit] Influences

As from the ancient Japanese myth of Amaterasu, Tsukuyomi, and Susano'o, where when Izanagi washed his face after escaping the underworld his left eye became the Sun Goddess Amaterasu.