Acts Sharingan and the Klan Uchiha 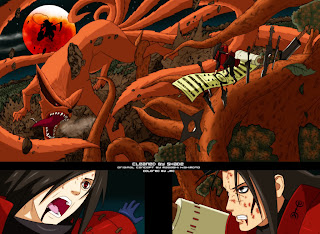 A man whose eyes tamed and controlled nine tails like a pet. My servant and my teachers. The only person in history to learn the secret wrote the end of the Sharingan. Eternally invincible.'s Uchiha Madara". - Itachi Uchiha

Madara's life so far. (also may be known as Tobi)

Tobi made a joke saying that it could be called fail-safe, but Itachi only as far as "failed." He then told Sasuke that he is a man who helped Itachi destroy the Uchiha clan, and called himself Madara Uchiha and said that he will tell Sasuke about Itachi.

Sasuke began to experience panic attacks and Madara tried to hold her head and told him to breathe, but Sasuke patted her hand and fainted. When Sasuke awoke, he found that he was tied.

Madara apologized and said that he had to, and told him that Itachi was ordered to kill the Uchiha clan of Konoha. Madara said that there is a big problem since Konoha was formed to realize what had happened he had to tell the story from the beginning, about 80 years ago. Madara explains that life is a battlefield and the battle was causing conflict with the Senju clan, and he finally faced their leader, Senju Hashirama, Madara was one of the most admired man.

Hashirama respected and feared as the most powerful, and only the Uchiha clan strong enough to compete against the Senju, so when one side has hired another rented Uchiha Senju. Madara himself became famous for their fighting, and that's when Sasuke interrupted, asked if he took his brother's eyes to fame, but refused, Madara said that he did so to protect the clan. The more respected they become, the more they tried to subdue her and her brother offered to him. But not long after that, Senju clan requested a truce with the Uchiha. Madara was skeptical though, after so much hatred and bloodshed he did not believe their declaration of peace is genuine and that they would delete out Uchiha one day, but the clan wanted it, and so he reluctantly agreed. Soon after they made an agreement with the Land of Fire and the system of one country and one ninja was created and quickly adapted by other countries, as a result of a more peaceful world.

However, new problems arise, the position of Hokage. Land of Fire and villages all chose Hashirama. Madara was worried about the status of the Uchiha clan with their greatest enemy was in control, so he decided to fight for the position Hashirama Hokage, but even away from the clan Uchiha Madara. He decided to leave the village, but returned with a vindictive Kyuubi and struggling Hashirama ... and defeated and thought dead. Hashirama brother wants to make sure no trace Uchiha Madara, so he gave them a position as a sign of confidence in the police, but it's true purpose is to separate Uchihas and keep them under watch. Some Uchihas realized what was happening and knew Madara was right, but the supremacy of the Senju clan Uchiha.

Then 16 years ago, the Kyuubi attacked the village. Since the Mangekyou Sharingan can control the Kyuubi, the leader of Konoha Uchiha clan immediately suspect and they were forced to live in the corner of Konoha and closely watched by Anbu. Third Hokage against this, but his voice was inaudible. They separated and discriminated.

Sasuke's father plans to take over the village and used as a spy in ANBU Itachi, but Itachi was a double agent and was feeding information about the Uchiha to Konoha as well. Itachi had the ninja war 3 when he was four years old and it made him want to avoid a conflict, that's why he sided with Konoha. If Uchiha attacked the village will be in a state of flux and weaknesses and the other villages would be attacked, which is likely to have started the war ninja 4. Itachi was assigned to slaughter his own clan to avoid finger pointing, Madara said that when he was still bitter and wanted the war so he could take revenge on the Senju and the Uchiha, but Itachi knew Madara was alive and seeking him out to make a deal, He will provide an opportunity for revenge Madara to Uchiha if he promised not to harm the village. Sarutobi continues trying to negotiate, but they led nowhere and Itachi and Madara fulfill the task. But Itachi could not kill Sasuke, he threatened to hurt her and begged Danzo to protect Sasuke Sarutobi and promised to not tell the truth.

Sasuke Madara was stopped at that point, insisting that he almost died in the fighting Itachi several times. Madara said that Itachi Sasuke should be forced into a corner in order to cleanse themselves of the Curse Seal and Orochimaru with it, and hoped that Sasuke would get the Mangekyou Sharingan by killing him. Sasuke refuses to believe Madara, saying that he lied and accused him of calling the Uchiha Kyuubi and get blamed. But Madara was fired, said that Itachi lied to Sasuke so that he did not believe him, even giving the Amaterasu Sasuke to try and keep him away. Itachi joined the Akatsuki to watch them and return to the leaf village after the Third Hokage's death as a warning to Danzo and the elders. Itachi wanted Sasuke to kill him, returned Uchiha clan and return to the Leaf village as a hero ... Madara then let Sasuke go.


Madara then sat on some rocks on the sea shore with Sasuke. Sasuke awakened his Mangekyou Sharingan and claimed that the team will now be referred to hebi Taka team, and that they would destroy Konoha. Madara asked if he wanted Itachi's eyes, but Sasuke refuses, she said she would see things differently from Itachi.
Madara went to Kisame, who upset because he believed Tobi died. Sorry Madara Kisame to keep out of the loop because they are so close and show him her face. Kisame facility and said that he feels more comfortable now because he's working with Mizukage, leader of the village of Mist.

Madara and Kisame then met with Taka and Madara Sasuke asked what he planned to do. Sasuke stated that they will issue Leaf village elders, no one else. Kisame says that someone else will be involved, and Taka was not strong enough. Suigetsu became frustrated and said that he was not serious in their game against and attacking Kisame, but Madara blocks Suigetsu's sword with his arm. Suigetsu Karin angry and stated that the only reason he joined was to get Sasuke Kisame. Madara went on to say that the Akatsuki losing too many members and no longer good enough and that the two teams must work together. Sasuke Madara questionable but said he would give him one of the Bijuu, he then explained that the chakras Bijuus monsters and really have some Hashirama under his control, he then divided them among the other villages as a sign of trust and to maintain the balance of power. Madara stated that it was not a bad deal, and Sasuke said he was generous ... but Madara said that if Sasuke betrayed Akatsuki that he would die. Kisame says that Akatsuki has 7, and Madara says that Akatsuki will capture the Nine-tails and that Taka can take the Eight-tails.
After the meeting ended, Madara met with Zetsu. Madara said that since Itachi died that he did not have to keep their agreements anymore. Madara Zetsu said that a long wait, but he did not believe that so many of the members of Akatsuki would die to get them where they are. Madara then praised the fallen Akatsuki and glad that he won over Sasuke.

Madara then shown sitting near Konan and Pein. Pein Madara asked why not go after the Kyuubi yet, Pein said that he had an unexpected guest. Madara then taunted Pein, saying that Jiraiya would have been very strong if the "invincible" Pein has a problem with him. Pein got angry with this and said that Jiraiya sent and that he could go after the Kyuubi whenever he wants. Madara then began to go and tell Pein that he should hurry because Konoha will be ready for him if he waited too long, then told them that he sent Sasuke after the Eight-tails. Konan was skeptical when Sasuke could work, but promised to Madara.

Madara and his brother

She has a younger brother, Izuna, who Madara's equal in every way and they are constantly competing to prove who is better. It's through their competition that they have Sharingan, and then awakened the Mangekyou Sharingan, the first in the history of the clan to do so. They use their power to take control and unite the clan, with his brother, Madara, became the leader.