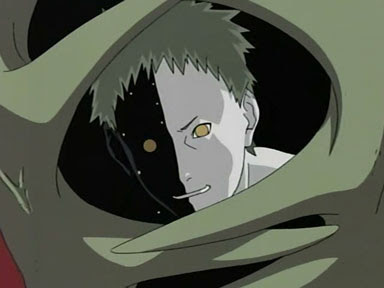 Zetsu (ゼツ) is a member of Akatsuki
Personality

Zetsu is easily distinguished by two large venus fly trap-like extensions enveloping his head. These extensions can envelope the rest of his body as well, giving him a plant-like appearance. When his extensions are open and his head is visible, it is revealed Zetsu has two different colored halves of his body, the left side completely white and the right side black. To go with this, Zetsu seems to have a split personality, as in the Japanese version of the manga the black half of his face speaks only in Katakana while the white side uses Kanji and Kana, and in the English episodes the black side has a different voice actor than the white side. The two halves also seem to converse with each other, and occasionally differ in opinion. They also seem to communicate with their thoughts. To further his venus fly trap theme, Zetsu is also a cannibal.

Zetsu's main role within the Akatsuki is to function as a spy, often acting as a hunter-nin for Akatsuki. He has been shown able to move his body and take part in the tailed beasts sealing ritual simultaneously which, in addition to being unique to him, allows him to act as a lookout while the sealing takes place. This might refer to the split personality theme;since he acts as two different people, one side might focus on the sealing jutsu while the the other side might patrol the surrounding area. When an agent to Akatsuki, or possibly even a member, dies, Zetsu is sent to devour said bodies as to not have their secrets revealed. Due to the role he plays, Zetsu is the only member of Akatsuki to act without a partner on a regular basis. Despite this, Zetsu serves as a sort of superior to other members, as they often report directly to him instead of the actual leader, Pain. Zetsu is also the one sent to retrieve the rings of dead Akatsuki members.

Zetsu has been shown having his complete loyalty to Akatsuki, to the extent that the leader, Pain, trusts Zetsu with the knowledge of his identity. As a possible reward for his loyalty, Zetsu was once given a subordinate, Tobi, who would later become a member of Akatsuki himself. Zetsu is also shown knowing that Madara Uchiha is the founder of Akatsuki. He knows Tobi is Madara, since in chapter 395 he reports to Madara who at the time is wearing the mask that is identified with Tobi. During a conversation with Madara, Zetsu mentions that "It's been so long..." implying that he has known Madara and been part of his plans for some time.

Little is currently known about Zetsu's abilities, though it has been seen he uses whatever abilities he has to help his hunter-nin role within Akatsuki. The only technique he has been shown using is his Mayfly technique, with which he merges with the ground to instantly travel to a new location. It has also been noted that Zetsu has the ability to "record" the things he sees. After the battle with Sasuke and Itachi, Madara Uchiha, asks him "Did you make sure to record the whole thing while you watched?", and Zetsu replies, "Relax, I got everything". He may also be able to allow anyone to view what he's seen, noted when Madara says he'll "enjoy the viewing later", or it could just be Madara, with the use of his Sharingan, reading Zetsu's mind.

Zetsu's first appearence in the series was just after Naruto Uzumaki's and Sasuke Uchiha's battle at the Valley of the End. Just as the two delivered their final attacks, Zetsu appeared in the distance, as if surveying their power. He later appeared with the other Akatsuki members during a meeting about their plans and the situations of the world around them.

Zetsu makes a Part II appearance while Akatsuki seals the One-Tailed Shukaku to tell Pain that a rescue attempt for Gaara, whom Akatsuki had captured, is already in motion. Following the defeats of Yura and Mukade from Sunagakure, Zetsu travels to their dead bodies' locations to devour them and destroy any secrets their bodies left behind. Following Sasori's death, Zetsu and Tobi travel to their former headquarters to retrieve Sasori and Deidara's rings, where Zetsu sees Sasori's true form for the first time. While Deidara still lives, Tobi finds Sasori's ring, and believes he could be a member with it-Zetsu says that it is not that simple. But Tobi does become a member, though Zetsu's two halves argue over whether Tobi should join.

Zetsu's only notable appearance in this arc is to retrieve the body of Yugito Nii for fellow members Hidan and Kakuzu and take it to their new headquarters, allowing Kakuzu and Hidan to track other targets. Zetsu is shown appearing in all meetings during this arc as well.

Zetsu, following the death of Deidara, tells the other members that both Deidara and Tobi have died alongside Sasuke Uchiha, though in reality only Deidara died. Zetsu is also shown having watched Pain's battle with Jiraiya, and following the battle Zetsu's two halves argue over whether to watch Tobi's battle with Naruto Uzumaki or Itachi Uchiha's battle with Sasuke Uchiha. He chooses Itachi's fight. As they watch the fight, Zetsu's white half wonders how Sasuke beat Itachi using only the normal Sharingan, while his black half claims that the Sharingan is just a weapon, and the skill of a weapon depends on its user. However, some believe that Sasuke's Cursed Seal is what has made his Sharingan so powerful. After Itachi dies and Sasuke passes out, Zetsu leaves the area, and reports to Tobi. After a short battle with the 8 Man Squad containing Naruto, Sakura, Kakashi, Sai, Yamato, Kiba, Shino, and Hinata, the two returned to the battle area where Sasuke and Itachi's battle was although Zetsu did consider about having revenge against Naruto for being called 'aloe vera'. They retrieved the two bodies before the 8 Man Squad did and took their leave. Zetsu is last seen at an unknown Akatsuki hideout.