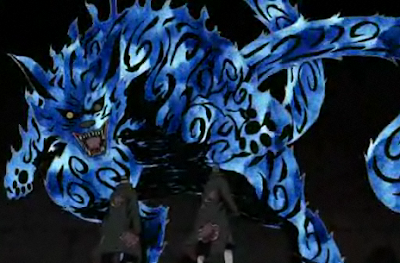 The Two-Tailed Demon Cat (ニ尾の猫俣, Nibi no Nekomata) is a fire-breathing, flaming nekomata sealed within Yugito Nii of Kumogakure. The demon cat was said to be a living ghost.

Soon after her introduction, Yugito is captured by two Akatsuki members, Hidan and Kakuzu, though it is unknown which was specifically assigned to capture her. Despite luring her two pursuers into a closed space, sealing the exits, and transforming herself into the demon cat, Yugito was overpowered and rendered unconscious by the two Akatsuki members. Zetsu later arrives to take her off their hands, and she later dies as a result of having the Tailed Beast extracted from her.

As the demon cat's host, Yugito has the ability to transform into a minitature form of the demon cat, which gives her access to its strength and its ability to breathe fire blasts from its mouth without losing much control. The demon cat's nickname brings to mind of its dead manipulation abilities.
Influence

Cats are the common species throughout the world and stories of bakeneko (化け猫, monster cats) are popular throughout Japan. In myth, the nekomata (猫俣, forked-cat) is said to be an older cat that has had its tail split in two. Reportedly large in size, these cats are said have the ability to manipulate the dead-like puppets and have been associated with strange fires and occurrences. This may be related to the demon cat's ikiryō (生霊, living ghost) nickname and its fire-breathing abilities
at 12:11 AM