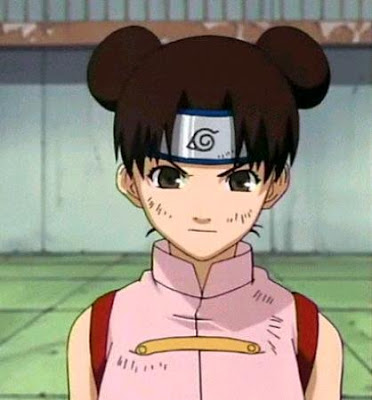 Tenten (テンテン, Tenten) is a supporting character in Naruto. She is the female member of Team Guy, teammate of Rock Lee and Neji Hyuga, and specializes in throwing weapons by summoning them from specially prepared scrolls.The change in her outfit from the manga to the anime was her shirt was blue not pink. The animators thought she should have "warmer" colors.

Little is known about Tenten's past or personality. She strongly believes that female ninja can be as strong as male ninja. Tenten's personal dream is to become as strong as Tsunade. She is the only weapon specialist of the Konoha nin that was in the Chunin Exams, so its safe to assume her training with Might Guy mostly consisted of long range fighting. She can be quite fierce sometimes, especially with Lee, or in some instances, Naruto. She is strong and determined, but not above showing a softer side when it comes to her teammates. Tenten also has shown a strong distaste for weakness or being overly dependent for other people, and during a filler arc yells at Naruto for his compassion towards Ranmaru who had never learned to take care of himself. She seems to have a high level of respect for her teammate Neji, since she always praises his skills, especially when Neji was fighting Naruto in the third round of Chunin Exam. She eventually recognized Naruto's skills and gave him her respect after he defeated Neji in the Chunin Exam Finals.
Abilities

Tenten specializes in weaponry, and as such has not been shown to use many genjutsu or taijutsu. Tenten carries these weapons in a number of scrolls, though in Part II, she instead carries a single large scroll. Tenten primarily uses Projectile Weapons in battle, allowing her to draw weapons from those scrolls. She has occasionally launched kunai directly from her scrolls at a force as though they had been thrown in a manner similar to rhythmic gymnastics. In Part I her arsenal is composed mostly of steel projectiles, though in Part II she is shown using a spiked bomb. In the anime, Tenten has demonstrated sufficient taijutsu skill and also conjured close-combat weapons from her scrolls, such as a bo staff, tonfas and even a heavy flail, as well as displayed knowledge of exploding tags. Originally a Genin level ninja who graduated the academy a year before Naruto did, Tenten is a student of Might Guy together with Rock Lee and Neji Hyuga. Her favored method of attack is to throw her scrolls in the air in such a way as to cause them to spin above her, then jump between them and toss a myriad of weapons at her opponent in rapid succession, otherwise known as Twin Rising Dragons. She also uses strings to control and guide the direction of her weapons. However, this technique is useless against opponents who use wind attacks, as seen in her short battle against Temari.


Tenten appears in the preliminaries of the Chunin Exams, and is quickly defeated by Temari, who is able to block all her weapons and trap her in a vortex of wind. Tenten helps Neji train his Heavenly Spin before the finals, and admires the prowess he shows in battle against Naruto. She also greatly recognizes Naruto's skills for being able to defeat Neji, a feat that she herself has yet to accomplish.

During the Konoha 11 arc, Tenten is shown to be a very keen observer, picking up on facts that others overlook. She shows compassion for her teammates and is tough when she needs to be. During a filler arc Tenten shows disgust for Ranmaru, a young cripple who could not take care of himself. She then saves his life by taking him to the curry of life shop, and teaches him that life is worth living and that you don't need to be to dependent on other people. She scolds Naruto for his impulsive actions and actually smacked him for faking his own death in the Bird Country filler arc. She claims that she was worried about him, which is an example of her compassionate nature. Although this could have also been an example of her stubborn and inquisitive nature because she was also upset that Neji had caught on to Naruto's plan and she was the only one left in the dark. In the last of the filler arcs, Tenten is the only one of the Konoha Genin to be left out of the mission, and Tenten scolds Lee because of it. Rock Lee explains that Tenten was away on another mission and so couldn't have come, though Tenten attacks him anyway.

Team Guy is sent to assist Team 7 in rescuing Gaara. Along the way, the group encounters Akatsuki member Kisame Hoshigaki. Tenten tries to attack Kisame with a spiked bomb, but he is able to avoid the explosion. Seeing that Neji, Lee and Tenten is in the way, Kisame quickly creates three water clones who captures the three team members in a water prison leaving the original Kisame to fight Guy in peace. This does not go well for Tenten who is about to suffocate due to lack of oxygen in the small sphere of water. She was saved when Neji broke out of his own sphere and released Lee who took out the Kisame clone holding her captured.

After Kisame is defeated and Team Guy reaches the Akatsuki hideout, the team disperses to remove a number of seals in the surrounding area that are making entrance to the lair impossible. Although they succeed, they are each forced to fight exact copies of themselves, with the handicap of the them tiring out, while the clones seems to have infinite energy. However Lee realizes that while each clone is as strong as themselves when it was created, they have no emotions and hence no drive to surpass their current limits. Realizing this, they each pushed to surpass themselves and using a new stronger jutsu, each defeats their lookalike in time. After Gaara is rescued, Team Guy returns to Konoha with Team 7.

Team Guy was in a mission during the invasion, not knowing that their village was under attack. Weary from their mission, Tenten stops her team, saying that they should take a break. However, Guy states that birds were flying from Konoha as if to escape, and Neji says that he has a bad feeling and that they should head back right away, much to her annoyance and dismay.