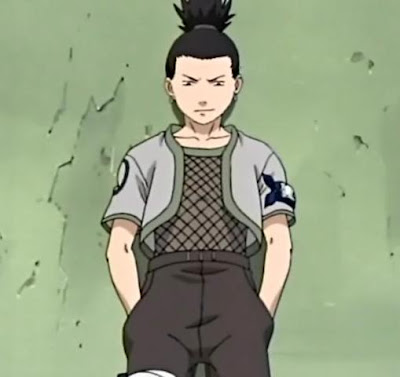 Shikamaru Nara (奈良 シカマル, Nara Shikamaru?) is a fictional character in the Naruto manga and anime series created by Masashi Kishimoto. In the anime and manga, Shikamaru is a ninja affiliated with the village of Konohagakure. He is a member of Team 10, a group of ninja consisting of himself, Choji Akimichi, Ino Yamanaka, and team leader Asuma Sarutobi. Shikamaru is portrayed as a lazy character, unwilling to apply his prodigious intelligence; Kishimoto has noted that he likes Shikamaru due to his easygoing nature. Outside of the Naruto anime and manga, Shikamaru has appeared in two of the feature films in the series: Naruto the Movie 2: Legend of the Stone of Gelel and Naruto: Shippūden the Movie, as well as several other media relating to the series, including video games and original video animations.

Numerous anime and manga publications have commented on Shikamaru's character. Many reviewers commented on his laziness and intelligence, and noted his transformation into a leader; Anime News Network celebrated Shikamaru's emergence as "an unlikely hero" in the Naruto storyline. Shikamaru has also been highly popular with the Naruto reader base, placing high in several popularity polls. Merchandise based on Shikamaru has been released, including action figures, key chains, and patches.
The name of the trio "Ino-Shika-Cho", which teammates Ino Yamanaka, Shikamaru, and Choji Akimichi use to refer to their team, is derived from a hand that can be played in the card game hanafuda, with "ino" meaning "boar," "shika" meaning "deer" and "cho" meaning "butterfly". In the series, Shikamaru's family raises deer, and his family name, Nara, is the name of a park in Japan that is famous for its group of free-roaming deer.Masashi Kishimoto has noted that he likes Shikamaru due to his easygoing nature despite being a genius, and contrasted him against Sasuke Uchiha's intelligent but abrasive personality. Kishimoto also comically remarked that he would marry Shikamaru if he were a girl, noting that Shikamaru would likely be successful in life. When designing Shikamaru's Part II appearance, Kishimoto wanted to give Shikamaru a unique appearance despite drawing him with a vest that several other ninja wear in the series. As a result, he drew his forehead protector on his arm in order to not obscure his hair.

Personality
From left to right: Choji Akimichi, Shikamaru, and Ino Yamanaka as they appear in Naruto: Shippūden

Shikamaru is a highly unenthusiastic person, and he attempts to go through life with minimum effort. In his free time, he takes naps, watches clouds, and plays strategy games such as shogi and go. When put into a situation in which he needs to exert effort, he attempts to try to find a way to avoid it; for instance, he will forfeit battles or pretend to be preoccupied. In the instances where he can not avoid these situations, Shikamaru tends to remark "how troublesome" (めんどくせぇ, mendōkusei?, English TV: "what a drag" or "such a pain"). Another aspect of his unenthusiasm is his dislike for bossy women, as he refers to them as "a pain". Despite this perception, he has expressed an interest in marriage and raising a family with a son and daughter.

Contrary to his lazy tendencies, Shikamaru is extremely intelligent; his teacher, Asuma Sarutobi, determined that Shikamaru's IQ was over 200. Shikamaru works well with his teammates Choji Akimichi and Ino Yamanaka, as the trio's fathers were in the same team in their youth. Among his teammates, Shikamaru is closest to Choji, who repays Shikamaru's confidence with unyielding loyalty. Shikamaru also has a strong bond with Asuma and often spends time with him playing strategy games. After Asuma's death, he vows to protect Kurenai Yuhi, who is pregnant with Asuma's child.

By using his Shadow Imitation Technique, Shikamaru can merge his shadow with his opponent's shadow, and force his opponent to mimic his movements.

Shikamaru's abilities are based on the Shadow Imitation Technique (影真似の術, Kagemane no Jutsu?, English TV: "Shadow Possession Jutsu"), the signature technique of his clan. When using the technique, he can manipulate his shadow, stretching or compressing it to his desire. If he merges his shadow with an opponent's shadow, his opponent is immobilized and forced to mimic Shikamaru's movements.As the series progresses, Shikamaru becomes able to manipulate his shadow in new ways. Near the end of Part I, Shikamaru's father teaches him how to use his shadow to strangle his opponent.[27] By Part II of the series, Shikamaru is capable of utilizing multiple shadow-based techniques at once and can lift his shadow from the ground in order to interact with physical objects; for instance, he can pierce enemies with the shadow tendrils or use them to throw weapons. Aside from his shadow techniques, Shikamaru utilizes his prodigious intelligence in battle, considering every element of the situation at hand and analyzing the information in moments. By doing so, he can plan ten moves in advance of his opponent and devise over a hundred strategies to use.

Shikamaru first appears in the series during the Chunin Exams, yearly exams for ninja who wish to advance in rank. Shikamaru approaches the exams with a sense of apathy; when he battles the Sunagakure ninja Temari, he defeats her but forfeits his match to her due to his unwillingness to finish the battle. Despite this loss, he is the only ninja among his peers to be promoted to the rank of Chunin, as the overseers of the exams were impressed by the insight and intelligence he demonstrated against Temari. As a Chunin, Shikamaru is appointed the leader of a team to prevent Sasuke Uchiha from defecting to the village of Otogakure.Although Shikamaru's team manages to defeat the Otogakure ninja barring their way, Sasuke manages to escape.

In Part II of the series, Shikamaru is assigned the task of locating two members of the criminal organization Akatsuki.While his team manages to find their targets, Akatsuki member Hidan kills Asuma Sarutobi during the course of the battle despite Shikamaru's best efforts. After Asuma's funeral, Shikamaru sets out with the surviving members of Team 10 and Kakashi Hatake to avenge their teacher's death. As his team deals with Hidan's partner, Kakuzu, Shikamaru avenges Asuma by defeating Hidan.

Appearances in other media

Shikamaru has made several appearances outside of the Naruto anime and manga. Shikamaru is featured in Naruto the Movie 2: Great Clash! The Illusionary Ruins at the Depths of the Earth, the second featured film in the series. In this film, he aids Naruto Uzumaki and Sakura Haruno in fighting against Haido, a utopian idealist seeking to rule the world with a power called Gelel.In the fourth Naruto film, Shikamaru appears in a brief sequence, fighting against a large group of stone soldiers. He is also present in the third original video animation, in which he participates in a tournament. Shikamaru is a playable character in nearly all Naruto video games, including the Clash of Ninja series and the Ultimate Ninja series. In some games, he utilizes variations of his Shadow Imitation Technique not seen in the anime or manga. Naruto Shippūden: Gekitou Ninja Taisen EX2 marks the first appearance of Shikamaru in his Part II appearance in a video game, with the second one being Naruto Shippūden: Narutimate Accel.

Shikamaru has ranked highly in the Shonen Jump popularity polls for the series, continuously placing in the top ten and reaching fourth place in one poll.The last such poll was in 2006, in which Shikamaru was in tenth place. Merchandise based on Shikamaru has also been released, including action figures, key chains, and patches in both his Part I and Part II appearance.

Several publications for manga, anime, video games, and other related media have commented on Shikamaru's character. IGN stated that Shikamaru was one of their favorite characters in the series, and referred to him as "the poster child for any card-carrying member of Generation X" due to his general lack of enthusiasm and his unwillingness to utilize his potential. In a review of episode 110, IGN praised how Shikamaru managed to transcend his lazy nature in order to take on the mantle of a leader when assigned to lead a team in order to retrieve Sasuke Uchiha and agreed, that the decision to make him Chunin was fair. Anime News Network also commented on this development, calling Shikamaru's emergence as "an unlikely hero" one of the highlights of the arc. In a subsequent review of episode 135, in which the mission to retrieve Sasuke has failed and the members of Shikamaru's team were critically injured, IGN lauded the "great moment" in the episode in which Shikamaru began to cry after learning his friends will recover, and declared that he will be a better leader for the sake of his friends. Mania.com celebrated his "sheer intellect", calling him "one of the most fascinating characters in the series" and "one of the few truly brilliant fighters in shōnen anime". Another reviewer noted about his battle with Temari during the Chunin Exams, that it was "one of the better fights involving the supporting players]