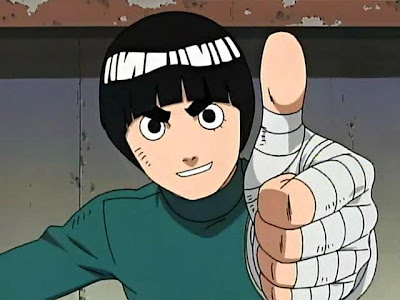 Rock Lee (ロック・リー, Rokku Rī?) is a fictional character in the anime and manga series Naruto created by Masashi Kishimoto. Kishimoto considers Lee his favorite character to draw, and at first designed Lee to symbolize human weakness. In the anime and manga, Lee is a ninja affiliated with the village of Konohagakure, and is a member of Team Guy, which consists of himself, Neji Hyuga, Tenten, and Might Guy—the team's leader. Unable to use most ninja techniques, Lee dedicates himself to using solely taijutsu, ninja techniques similar to martial arts. Lee dreams of becoming a full-fledged ninja despite his inabilities. Lee has appeared in several pieces of Naruto media, including the third and fourth featured films in the series, the third original video animation, and several video games.

Numerous anime and manga publications have commented on Lee's character. IGN compared Lee to Bruce Lee and Noel Gallagher, and Anime News Network called Lee the "goofiest looking character" in the series. Among the Naruto reader base, Lee has been popular, placing high in several popularity polls. Numerous pieces of merchandise have been released in Lee's likeness, including figurines and plush dolls

In an interview in Shōnen Jump's Naruto Anime Profiles Episodes 1-37, Masashi Kishimoto claimed that he enjoys drawing Lee more than any other character in the series. When designing Lee's appearance, Kishimoto intended to have Lee wield a variety of weapons, including nunchaku; however, due to time constraints while creating the series, he was unable to do so. Kishimoto has noted that he originally designed Lee to symbolize human weakness; Kishimoto's design of Sakura Haruno was also intended to carry the same symbolism. Due to the popularity Lee garnered over the course of the series, Kishimoto tends to place him towards the front of promotional artwork he appears in.

While attending the Ninja Academy, a school for prospective ninja in the village of Konohagakure, Lee's fellow students mock him for his inability to perform basic ninja techniques. As a result, Lee begins training constantly to become stronger. After graduating from the Academy, Lee is assigned to Team Guy, a four-man cell of ninja led by Might Guy. Inspired by Lee's determination to become stronger, Guy takes a personal interest in him, deciding to help him achieve his dream of becoming a splendid ninja. This relationship with Guy causes Lee to acquire many of Guy's traits. For example, Lee's green jumpsuit and shiny mop-top haircut are the same as his teacher's, as is his dedication to keeping promises and seeking rivals to develop his skills.Lee believes he can surpass the natural talents of others through hard work and passion; throughout the series, he attempts to surpass Neji Hyuga and Sasuke Uchiha, both of whom are labeled "geniuses". Despite his search for rivalries, Lee has a sense of honor and respect for his opponents, refusing to hold grudges against those who have defeated him and returning favors to those that have helped him. Lee uses formal language in both the English and Japanese adaptations of the anime and manga. In the Japanese anime and manga, he always utilizes honorifics such as "san and "kun", and in the English adaptations, he never uses contractions.

When he opens the chakra gates, Lee's skin turns red and the power and speed of his taijutsu techniques are enhanced.

Lee is unable to use ninjutsu or genjutsu, two types of techniques ninja in Naruto commonly utilize. To compensate for his inability, Lee specializes in taijutsu, techniques focusing solely on physical attacks. Under Guy's instruction, Lee learns several advanced taijutsu techniques, and creates a unique training regimen for himself. As part of his training, Lee wears heavy weights on his ankles at all times; however, he trains himself to the point that his peers still consider him fast when he is wearing them. When he removes his weights, Lee's speed increases to the point where he appears to be a blur while moving.

The taijutsu techniques Guy teaches Lee center around the Strong Fist style of combat.Part of this style involves the eight chakra gates, limits on the body's ability to use chakra, a form of energy which allows ninja to perform supernatural feats. Opening these gates, a feat difficult for even the most talented ninja, increases the power and speed of Lee's taijutsu techniques, but only at the cost of his health. Many of Lee's taijutsu techniques take advantage of the extreme power and speed he gains from opening the chakra gates, most notably his Lotus (蓮華, Renge?) techniques, many of which begin with a flurry of attacks to force the opponent into the air, followed by a blow that sends the opponent into the ground at high speed. Aside from his Strong Fist techniques, Lee has a natural predisposition towards the Potion Punch (酔拳, Suiken?, literally "Drunken Fist", English TV: "Loopy Fist") style of combat. When he drinks anything more than a drop of alcohol, he becomes inebriated, and his lack of coordination lends an element of unpredictability to his attacks.

Rock Lee first appears in the series as a participant in the Chunin Exams, twice a year exams for ninja who wish to increase their rank. During the Chunin Exams, Lee battles Gaara, a ninja from the village of Sunagakure, who cripples Lee by crushing his left arm and leg, injuring Lee to the point that he must abandon being a ninja. When Tsunade, a Konohagakure medical ninja, returns to lead the village as the Fifth Hokage, she offers to operate on him. Despite the procedure's fifty percent chance of failure, Guy encourages Lee to have the operation, Ultimately, Lee undergoes the surgery, which succeeds in healing his arm and leg. Immediately after the operation, Lee follows a team of ninja led by Shikamaru Nara who attempt to stop Sasuke Uchiha from defecting from Konohagakure to the village of Otogakure. Lee battles the Otogakure ninja Kimimaro. When Kimimaro is on the verge of defeating Lee, Gaara intervenes, continuing the battle. In Part II, Lee obtains the rank of Chunin, and is dispatched with his team to help save Gaara following his abduction by the criminal organization Akatsuki.

Appearances in other media

Lee has made several appearances outside of the Naruto anime and manga. In the third featured film in the series, Naruto the Movie 3: The Animal Riot of Crescent Moon Island, Lee acts as a member of Team 7 for the duration of the film. In the fourth film, which is set in Part II, Naruto Uzumaki, Sakura Haruno, Neji Hyuga, and Lee are assigned to escort the maiden Shion, who needs to perform a ritual to seal a demonic army. Lee also appears in the third original video animation, participating in a tournament.

Lee is also a playable character in nearly every Naruto video game, including the Clash of Ninja series and the Ultimate Ninja series. In some games, he utilizes variations of his techniques not seen in the anime or manga. Naruto Shippūden: Gekitou Ninja Taisen EX marks his first appearance in a video game set in Part II, with the second one being Naruto Shippūden: Narutimate Accel.

Lee has ranked highly in the Shōnen Jump popularity polls for the series, continuously placing in the top ten and reaching fifth place once. In later polls, Lee lost his top ten status. In an interview, Brian Donovan, the voice actor for Rock Lee in the English adaptation of the anime, commented that he likes Lee because he felt he was attempting to be a "knight in shining armor but bumbling and stumbling at the same time". Several pieces of merchandise based on Lee have also been released, including action figures of his Part I and Part II appearances, plush dolls, and keychains.

Several publications for manga, anime, video games, and other media have provided commentary on Lee's character. IGN called Lee one of their favorite characters in the series and compared his personality to that of Bruce Lee and Noel Gallagher. However, IGN also commented that Rock Lee is "kind of stiff" because of his very polite demeanor. Active Anime celebrated Lee's introduction in the series as a comedic relief to the growing tension of the story at that point. Anime News Network referred to Lee as the "star of [the Chunin Exam arc]", and claimed that he "almost single-handedly rescues this arc from being tossed into the 'entertaining but disposable' bin". Anime News Network also called Lee the "goofiest looking character" in the series and praised Kishimoto's "ninja-punk visual sensibilities" that allowed him to make Lee "damn cool when the action starts