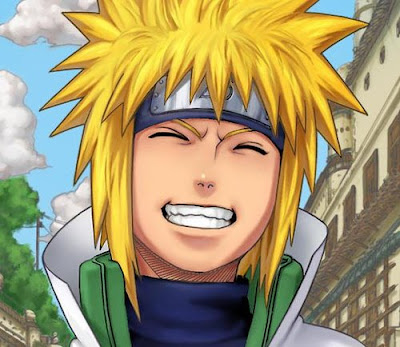 According to those who knew him, Minato was a very talented ninja, having been considered a genius that appeared once a generation, graduated from the Academy at the age of ten. He came under the tutelage of Jiraiya, and under his guidance, learned to develop his skills. Impressed with Minato's determination to succeed, Jiraiya took it upon himself to make him his apprentice and teach the latter his skills, including the Toad Summoning Technique. Minato quickly mastered the technique, being the only person to fully control Gamabunta, a feat not even his sensei or his son could do as of now. His skills would further grow with the development of his own jutsu, including the Rasengan, something he although never completed to his intendings, and the Flying Thunder God Technique.

As a gift for Kakashi's advancement to Jonin, Minato gave him a unique kunai marked with one of the Flying Thunder God transportation markers. Shortly afterwards, he informed the team of their mission: destroy a bridge that aided the enemy Rock ninja force. For the mission, Kakashi took Minato's place as commander of the team while he went to a different battlefield, where he was able to defeat a large number of Iwagakure ninja singlehandedly. His team, however, was unable to complete their mission, as differences between Obito and Kakashi lead the team to be caught in a trap. Obito, however, was unable to survive the mission, instead helping Kakashi save Rin by giving Kakashi his Sharingan eye before being completely crushed by rocks. When Rin used Kakashi's kunai, Minato arrived and easily defeated the Iwagakure ninja. Unfortunately, by the time he arrived Obito was already dead, though he managed to save Kakashi and Rin. They would later go on to fulfill their mission and help repel the invasion.

In the months to come, Minato was chosen by Hiruzen Sarutobi, the Third Hokage, to lead as the Fourth Hokage. As a result of this decision, the power crazed Orochimaru left the village. Minato's devotion to the village and his love for his friends inspired all those around him, and as such, he became well-liked by the villagers.

During his time and relationship with Kushina Uzumaki, Jiraiya showed Minato one of his developing books, which features a fictional character named Naruto. Minato appreciated the name and he would name his unborn son after the fictional character. Jiraiya, however, did not think the name was worthwhile. Kushina approved of the name, so Jiraiya had not much of a choice when both of them had approved.

However, just moments after Naruto's birth, the Nine-Tailed Demon Fox attacked Konoha. Minato rushed to the village, where he and Gamabunta faced off against the Tailed Beast. Near the end of the battle, Minato made the ultimate sacrifice; using the Dead Demon Consuming Seal, he sealed the demon fox into his newborn son, in exchange for his own life.

His dying wish was that Naruto be viewed as a hero, and not as the container of the demon fox, a request not honored by most of the villagers. The only few people who did honor the request was Hiruzen, and a few other ninja who had fought in the Third Great Shinobi War.

Since Minato never had a chance to pick his successor, Hiruzen, the Third Hokage resumed his role as Hokage. Soon after the sealing of the demon fox, Hiruzen made a decree that Naruto being a demon container should never be mentioned. This was done in the hope that if the children of Naruto's age grew up not knowing his true nature, they would not hold him in contempt like their parents did. Nevertheless, they still shunned him because of their parents' attitude towards him. Because of this, Naruto was isolated and became mischievous.

When sealing the demon fox, Minato divided the demon fox's chakra in two halves as he sealed it into Naruto. He sealed the Yin chakra with the Dead Demon Consuming Seal making it inaccessible to Naruto, while using the Eight Trigrams Sealing Style and the Four Symbols Seal on the Yang chakra to give Naruto access to it. This way, Naruto could call upon the demon fox's chakra without being completely controlled by it, though the Four-Tailed Transformation seems to negate this effect. Jiraiya states Minato wanted Naruto to have the Seal Key that matched Naruto's Trigram Seal to help complete a yet to be identified technique.

Jiraiya and Tsunade point out that, while Naruto physically bears great resemblance to Minato, his personality and style of ninjutsu are almost identical to his mother. This and an earlier statement from Jiraiya on the mission to retrieve Tsunade simply that Naruto and Minato had somewhat different personalities.

This was evident earlier in the Kakashi Gaiden arc where Minato behaved in a calm and collected but kind and cheerful manner, while dispatching sage-like advice and sound military sense years beyond his age when necessary. When faced with an enemy, he could kill in cold blood, and seemed well aware of the terror his reputation inspired in his foes. He appeared to be respectful of those around him, as he was reproachful of freely speaking of others' pasts, not at all concerned about putting his faith in Jiraiya in regards to his son's upbringing, and was said to have been a very nice person.

Jiraiya has said that Minato was a shrewd person and was not the type to do something without reason. All in all, Minato was known for an unbeatable determination and unbelievable drive which he passed on to his son.

Jiraiya noted that, although he was quite a genius, Minato's greatest aspect was his desire to succeed, largely attributing his success to hard work, another trait passed on to Naruto.

According to Jiraiya, Minato was easily one of the most gifted Leaf shinobi ever to live. So much so, a flee-on-sight order was given to enemy shinobi during the Third Great Shinobi War. Minato's brilliance became evident from creating several distinctive techniques, including the Flying Thunder God Technique, which essentially allowed him to teleport to any location with the use of a special seal. He also created the Rasengan, a technique that does not rely on hand signs, but instead uses a concentration of spinning chakra in the palm that causes immense damage to its target on contact. Later in the series it is revealed that this signature technique is actually incomplete. Minato had planned to add his own nature manipulation training to the Rasengan, making it even more powerful, but couldn't manage to combine the two prior to his premature death. Minato's possibly last technique was the Dead Demon Consuming Seal, which was used to seal the demon fox into Naruto, at the cost of his own life.

It is unknown exactly how strong Minato was in combat, but he is considered by many as quite possibly the most skilled ninja the Leaf Village has ever produced. He earned the nickname Konoha's Yellow Flash either because of his unrivaled speed and equally impressive use of it or for his creation of his Flying Thunder God Technique and the yellow light that accompanied the use of it (more than likely his hair flashing by). Once, during the Third Great Shinobi War, he was able to defeat 50 enemies using the technique by having other Konoha Shinobi throw his specially inscribed kunai at the group. It appears that he teleported from foe to foe, cutting them down instantaneously, as he was able to defeat them all in a matter of seconds and without a scratch.

Before it was revealed, many fans speculated that Minato was Naruto's father, mostly because of their nearly identical physique and looks. The two characters also have the same blood type and technique styles. Throughout the course of the series, characters who knew Minato had also given references to Minato when talking about Naruto. One might also add that Minato had access to a child, Naruto. It is unlikely, based on his personality and the reverence others have for him, that he simply grabbed a random child, and made them a container for the demon fox. He would only use his own son, rather than someone else's child, or a stray orphan. However, until it was revealed in Chapter 367, information about Naruto's family relations had been carefully avoided.

Before Pain was revealed, some speculated that Minato was the leader of the Akatsuki, considering they both have nearly identical hairstyles and the leader's apparent knowledge of the leaf shinobi and their beliefs, though it was later revealed that Pain's knowledge of this is due to being a student of Jiraiya during the Sage's stay in the Rain Country.
at 11:59 PM