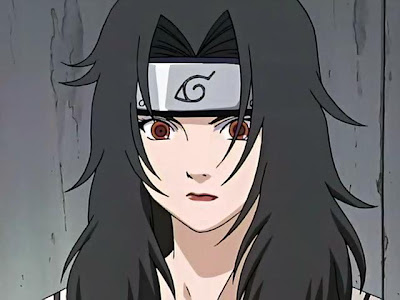 Kurenai Yuhi (夕日紅, Yūhi Kurenai) is the Konoha Jonin in charge of Team 8, which consists of Kiba Inuzuka, Shino Aburame and Hinata Hyuga.

Kurenai's team specializes in tracking. Relatively little is known about her, other than the fact that she graduated from the Academy at the age of 9, took the Chunin Exam and became a Chunin at the age of 13, and that she only became a Jonin recently. The anime expands on her background slightly, explaining that she had come to the village at a young age with a natural talent for genjutsu.

While she has a close bond with all of her students, she is especially concerned for Hinata. Kurenai knows how Hinata is viewed by her father, even though she is technically the heiress of the clan since she is the eldest child. She is also somewhat aware of her student's tremendous infatuation with Naruto Uzumaki. When Hinata tries to offer Naruto some medicine after his fight with Kiba, Naruto is hesitant to take it (most likely because of the abuse he suffered in his childhood). Kurenai convinces him to take it. Her personality is unyielding, honest, and simple. She also says she is a "big sister type."

Hints throughout the series also suggest that she has a romantic relationship with fellow Jonin Asuma Sarutobi, though neither will admit to anything. The two tend to be seen together often, so they clearly enjoy each other's company, and Kurenai blushed on one occasion when Kakashi Hatake more directly suggested a connection between the two. Late in the manga there is a flashback of Asuma buying her flowers and lying to Ino about it while blushing. Shikamaru requests to tell her specially about Asuma's death (and Tsunade had offered to do so before), and she breaks down sobbing at the news. In the manga series the romantic relationship is proven by the fact that Kurenai wears a wedding ring on her left hand and is pregnant with Asuma's child.

During the Chunin Exam, Kurenai watched her pupils from the sidelines. After Shino's battle, she commented on how it suddenly got cold in the room, in reference to his rather unmerciful defeat of Zaku Abumi. During Kiba's fight with Naruto, she thought to herself (and to Kakashi) that Naruto couldn't possibly beat Kiba, only to be surprised over and over as Naruto took everything Kiba throws at him. During Hinata's fight with Neji Hyuga, she remembered the terrible relationship Hinata had with her father. She also noted the stark contrast between the current Hinata, who refused to give up, and the former Hinata, who would give up easily. When Neji was sent into a blind rage by a comment of Hinata's, she helped stop him along with every other Konoha Jonin present, except for Asuma.

Kurenai was seen in the scenes involving the invasion of Sunagakure and Otogakure, when she was with fellow Jonin, and when she was at the Third Hokage's funeral.

When peace was restored among the villages, Kurenai and Asuma were seen at a dumpling shop by Kakashi Hatake. When Kakashi commented them on this, noting how friendly they are to each other, implying some form of romance, Kurenai blushes and protested at this, saying that it was Anko that wanted the dumplings. Asuma changed the subject quickly by asking Kakashi why he's there, and noted that Kakashi didn't like sweets.

Afterwards, Kurenai and Asuma discovered the Akatsuki members, Itachi Uchiha, and Kisame Hoshigaki, and had a brief battle with the duo. Despite Kurenai's natural genjutsu skills, her Demonic Illusion: Tree Bind Death was easily reversed by Itachi's Sharingan, causing the latter to mock her for her inexperience with genjutsu compared to his Sharingan. Before they could be finished off, Kakashi arrived to save them, only to be caught in Itachi's Tsukuyomi, and then was saved by Might Guy.

She had a short appearance during the Mizuki Strikes Back arc, in which she and Asuma attempted to interrogate Mizuki. Kurenai didn't have any significant roles until a much later arc, which covered a small incident in her past with an extremely talented genjutsu user. The girl, named Yakumo, was the heir to the Kurama clan, which specialized in genjutsu. She had a kekkei genkai ability that enhanced her genjutsu to an almost ridiculous extreme, allowing her to literally kill people with genjutsu. Kurenai sealed Yakumo's kekkei genkai in a ceremony similar to Kakashi's sealing of Sasuke's cursed seal, but it didn't work. After Yakumo resurfaced and causes lightning to strike the Hokage mansion (an illusion, but one so powerful that everyone in the village was convinced it happened), Kurenai requested to be separated from her team to deal with Yakumo.

In a flashback, the Third Hokage described both Yakumo and Kurenai as "untrained genjutsu users", noting their inherent talents in genjutsu. Yakumo, having physical difficulties training as a ninja, was put under the care of Kurenai. She had hoped to be like Rock Lee; she wanted to become a ninja despite her apparent handicap. Kurenai, unlike Guy, discouraged this attitude because of the kekkei genkai ability she would be forced to lean on.

On her way to visit Yakumo, Naruto confronted Kurenai about her involvement with Yakumo. To evade further interrogation by Naruto, she used Demonic Illusion: Tree Bind Death, leaving him incapacitated until Sakura, Guy, and Team 8 arrived. As she approaches Yakumo's cabin, she became trapped in a rebel's genjutsu, revealing afterwards that she had trapped her attacker in her own genjutsu. She discovered that these attackers were in fact Kurama clan members intent on kidnapping Yakumo. Seeing that her opponents were also genjutsu users, Kurenai noted that "there's no way [she] can lose." From this point, she and the opposing ninja basically fought with nothing but Demonic Illusion: Tree Bind Death, using variations on the standard theme of the jutsu. Kurenai ended up successful until the final encounter, where she was caught off guard and cut by shuriken. The blood revealed her presence to the enemy, who was the temporary leader of the Kurama clan, Unkai, allowing him to defeat her.

Kurenai was saved by the arrival of her team, along with Naruto and Guy. Later, when explaining to Team 8 the reasons for her departure, she claimed that the village "doesn't need any genjutsu users other than herself." This is her supposed reason for sealing Yakumo's abilities, but Shino recognized that she was lying. Yakumo, on the other hand, believed Kurenai did so in order to eventually wipe out the Kurama clan. She trapped her former sensei, Naruto, Sakura, and Team 8 in a genjutsu-created replica of the village which appeared to have been ravaged by war. Unkai was also in the illusion. Concerned by the powers Yakumo had, and her continually degrading mental state as a result of being unable to control them, he freed Naruto from the illusion so he could kill Yakumo. Everyone else was freed, as well, except for Kurenai. Yakumo kept her trapped in the illusion in the hopes of getting revenge and answers about her past. Naruto and the others headed back to the mountain villa and Naruto re-entered Yakumo's genjutsu world to help Kurenai. Yakumo learned that a monster named Idou that lived within her subconscious mind was the one who killed her parents. With Kurenai's help, she overcame the monster in her heart and freed Kurenai from her genjutsu. With her final mission from the Third completed, Kurenai re-assigned herself as the Jonin leader of Team 8.

As Asuma and his squad left to hunt for Hidan and Kakuzu, Kurenai looked on from her apartment, giving a curious yet uncertain gaze. She seemed to notice something but when she looked to the window, the team had already left. While the battle was happening, she noticed one of the flowers has fallen off its stem, and sensed something wrong with Asuma, and later she was seen gazing out at the rain with a fearful expression.

When Shikamaru informed her of Asuma's death, a grief stricken Kurenai fell to her knees, sobbing, while Shikamaru attempted to comfort her. She later placed flowers on his grave at his funeral. During a conversation with Shikamaru after the defeat of Hidan and Kakuzu, it was revealed to the audience that Kurenai was pregnant with Asuma's child and she was wearing a wedding ring (thus proving the hint of romance between the two).

Shikamaru, who wanted to decode Jiraiya's message, turned to Naruto for help, but found him still depressed over Jiraiya. To help his heartbroken friend, Shikamaru brought him to see Kurenai at the hospital (readers see she is heavily pregnant now). After the two talk to her for awhile, we learn that Shikamaru had been seeing Kurenai everyday and vowed to protect and teach her and Asuma's baby. After she left, Shikamaru pointed out to Naruto that he had lost his sensei too and that he truly understood what Naruto was going through. He also pointed out that Asuma and Jiraiya left them jobs to do: to protect and teach the next generation of Hidden Leaf ninja. With his friend's comforting words, Naruto got over his depression and they started decoding the message.

As a natural genjutsu user, most of her techniques revolve around genjutsu. Kurenai is the top genjutsu specialist of the Leaf Village. The one technique she is seen using the most, is the Demonic Illusion: Tree Bind Death technique. Kurenai can sneak up on an opponent and grow a tree around them to keep still. Once immobilized, Kurenai can appear from the tree to kill her target as she pleases, and is capable of using this jutsu multiple times in a row.