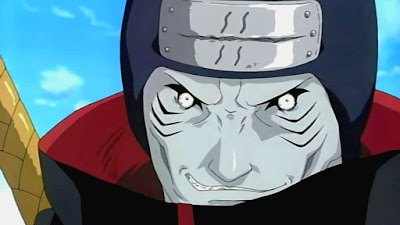 Kisame Hoshigaki (干柿鬼鮫, Hoshigaki Kisame) is a missing-nin from Kirigakure and was partnered with Itachi Uchiha within the Akatsuki.

Kisame is a former member of Kirigakure's Seven Ninja Swordsmen of the Mist, an ever-changing group of ninja that wield particularly large weapons in battle. While in Kirigakure, Kisame is known to have formed a connection to Suigetsu Hozuki and his brother. His former country, the Land of Water, now seeks him out for plotting to overthrow its government and being involved in numerous assassinations Kisame later joins Akatsuki and is partnered with Itachi Uchiha.

Kisame is rather battle-loving, enjoying to fight with others. However, Kisame is usually forced to leave a fight, being paired with Itachi (who only fights when necessary). When this happens, he has been known to inform his opponent(s) that they "don't know how lucky they are." Like other characters who have trained to be one of the Seven Ninja Swordsmen, Kisame enjoys mutilating his opponents; as seen when he suggests cutting off Naruto Uzumaki's legs to make him easier to carry.

Kisame is also one of the few members of Akatsuki that gets along well with his partner. Kisame has a loyalty to Itachi, willing to take any commands he gives without complaints and constantly looks out for his well-being. Although Kisame does have his pride, he acknowledges Itachi as the stronger of their duo. Still he seems to like mocking and questioning Itachi on occasion, such as commenting on how he sounded a little sad about Orochimaru almost destroying the Leaf Village.
Part I

Kisame is first introduced alongside Itachi during a mission to kidnap Naruto Uzumaki. After he and Itachi gain attention due to their unusual clothing, Kisame and Itachi face off against Asuma Sarutobi and Kurenai Yuhi, two Konoha Jonin. However, Asuma and Kuernai stand little chance and are almost immediately defeated. The arrival of Kakashi Hatake, however, prevents their deaths. While Itachi fights Kakashi, Kisame waits patiently for Itachi's victory. After Itachi orders Kisame to kidnap Kakashi and kill Asuma and Kurenai, Might Guy arrives and kicks an attacking Kisame in the face (to which Kisame resents to this day). Following Guy's arrival, Itachi orders Kisame to retreat, not wanting to start a war.

Itachi and Kisame then continue hunting Naruto, finding him under the protection of Jiraiya, who neither are willing to risk fighting. After Itachi hypnotises an attractive woman named Emi to seduce Jiraiya and leave Naruto alone, Kisame and Itachi confront Naruto in a hotel hallway. Kisame considers removing Naruto's legs so he can not run away, though Sasuke Uchiha, Itachi's younger brother, shows up in time to distract the two from Naruto. When Naruto attempts to fight, Kisame uses Samehada to absorb all of Naruto's chakra. Kisame then attempts cutting off Naruto's arms so he won't be capable of weaving hand signs. Before he can do this however, Jiraiya arrives and defends Naruto. Kisame then reveals to know who Jiraiya is, and chuckles after witnessing the two share a small arguement. Kisame and Itachi are driven off by Jiraiya without kidnapping Naruto.

While not making a physical appearance, Kisame's hologram does appear during an Akatsuki meeting. At the meeting, he asks about how long it's been since they were all together.
Part II

Kisame gets a Part II introduction in the form of a clone to distract Team Guy from rescuing Gaara. Kisame later reveals his choice to fight Team Guy as revenge getting kicked in the face (but grows disappointed when Guy doesn't remember him). While Guy is barely able to withstand Kisame's attacks, the rest of Team Guy are incapable of trading blows and are eventually locked within Kisame's Water Prison Technique. However, Neji frees himself and the rest of his team using his Eight Trigrams Sixty-Four Palms. Upon being forced into a corner, Guy opens his sixth gate and defeats Kisame's clone with the Morning Peacock technique.

Kisame successfully manages to capture the Four-Tailed Beast (without a scratch), his assigned Tailed Beast, around the same time Team Snake is formed. During the following Akatsuki meeting to seal the Four-Tails, Kisame and Itachi are informed of Team Snake's formation with Sasuke as its leader. Kisame is later told by Itachi to stand guard outside the former Uchiha clan headquarters and to let only Sasuke through. After Sasuke leaves the rest of Team Snake, Suigetsu (who is a former candidate for that organization) starts a fight with Kisame, wanting to claim Samehada as his own (although it is unknown if Suigetsu can even hold it, since spikes will appear when held by anybody but Kisame). It is currently unknown if the two ever fought, but Suigetsu and Kisame are revealed to both be alive following Sasuke's fight with Itachi and it seems he will be aiding both Akatsuki and Hawk. Kisame later encounters Tobi, who reveals his identity as Madara (and possibly the Mizukage). Kisame seems to know him and comments that he feels a lot better knowing it's him who's pulling the strings.

Kisame is said to be the strongest of the Seven Ninja Swordsmen of the Mist. At one point Guy battled a clone of Kisame's with 30% chakra-supply, and Guy was forced to open his Sixth chakra gate in order to survive. Kisame himself proved powerful enough to successfully capture the Four-Tailed Beast's Jinchūriki, despite noting his target's exceptional powers. Though a difficult task by his own admission, Kisame merely complains that he is "a bit tired".

Kisame's weapon is called Samehada, a sentient, scale-covered sword that shaves skin instead of cutting it. Samehada is also capable of absorbing chakra, but requires Kisame's own chakra to perform such feat. Only Kisame is allowed to wield Samehada; if anyone besides him tries to pick it up, spikes protrude from its handle and it returns to Kisame's side.

Kisame has also been known to display astonishing speed and incredible physical strength capable of matching if not surpassing Might Guy and taijutsu skill capable of staying toe-to-toe with him. He has also demonstrated impressive mastery of water-based jutsu to the point of being able to alter the entire battlefield by using his Water Release: Exploding Water Shockwave to create a lake's worth of water to give him the field advantage and to use for attacks.

His method of battle revolves around wielding water-based jutsu in combination with his powerful taijutsu and raw physical attacks. His shark-like qualities carry over to the type of techniques he uses in battle, as he often shapes bodies of water into the forms of sharks that proceed to attack opponents. Kisame is also noted to have a particularly large amount of chakra in his reserves (Karin states she has never seen so much chakra in one place), though it is unknown how much he can use. Even when he fights at 30% power in one instance his chakra supply is compared to that of a Nine-Tailed Demon Fox-enhanced Naruto Uzumaki during the Chunin Exams. Pain has also stated that Kisame has the largest chakra reserve in all of Akatsuki.