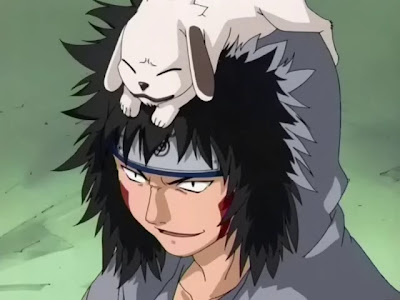 Kiba Inuzuka (犬塚キバ, Inuzuka Kiba) is a supporting character in Naruto. He is part of Team 8. He and his nin-dog Akamaru fight together as a team

Kiba is often short-tempered and impulsive, in stark contrast to his teammates Shino and Hinata, and can be prone to making mistakes when he is agitated in battle. The fact that he enjoys the company of combat, as well as a habit of showing a joyful smile when facing a particularly strong opponent (or under a predicament situation in the hands of one), strongly suggests that he's willing to take his life for a mission, as seen during his battle with Ukon and Sakon, where he was ready to take his own life to prevent one of them from completely destroying his body. He deeply cares for Akamaru, and is willing to do whatever is necessary to protect him. And despite his rather gruff attitude, many of Kiba's actions reveal that he's very close to his older sister, Hana Inuzuka, and remains fiercely loyal to the Inuzuka clan.

Kiba often argues with Shino over what course of action the group should take, particularly when Shino advises caution. Kiba often sees himself as the group leader, and becomes offended at any of Shino's actions that he perceives as challenging his leadership. It seems as if there was a contest for the leadership of Team 8 during the Chunin Exams because Kiba says Hinata voted for him. Despite his disagreements with Shino, he considers Shino a friend, and respects his fighting capabilities. Kiba gets along well with Hinata, but tends to worry about her, urging her to be strong before the second phase of the exam, and forfeit rather than face a dangerous opponent.

Kiba apparently likes to tease Hinata about her affections for Naruto. These teasing usually manifest themselves in tricking her that Naruto is near or just mentioning her reactions to him to other people, much to her embarrassment.
Abilities

As a member of the Inuzuka clan, he has enhanced senses of smell and hearing, also with an incredible speed (may be one of the fastest ninja). During the hunt for Itachi Uchiha, he stated that his nose was stronger than any ninja hound that even Kakashi congratulates him and says that all Inuzuka clan must be proud. He is proficient in several canine-based jutsu. His battle style is usually a combination of taijutsu enhanced by his special clan jutsu. Despite his pride as an individual fighter, he usually performs tagteam tactics with Akamaru.

Although he appeared before the Chunin Exams, it is where we first really know who he is. The Chunin Exams are where he took his test with his teammates Shino Aburame and Hinata Hyuga. He used Akamaru to find the answers during the first part of the test.

During the second phase of the exam, while Team 8 easily took an Earth scroll from a rival team, Kiba wished to acquire yet another to narrow the competition, despite Shino and Hinata's reservations. In investigating a confrontation between two teams, they witnessed Gaara killing three Rain Genin, and Akamaru was traumatized by the sight.

Kiba was matched against Naruto in the seventh match of the preliminaries. Kiba thought that he would easily win, since Naruto was the worst student at the academy. Naruto then got very annoyed at Kiba. While Kiba initially had an advantage due to his superior speed and strengthening Akamaru with a soldier pill, Naruto tricked him into knocking Akamaru unconscious, then after farting in Kiba's face (renderering his sense of smell useless (and in a way paralyzing him), defeated him with the first use of Naruto Uzumaki Barrage. Kiba regained consciousness on the stretcher, and urged Hinata to forfeit if she was matched against Gaara or Neji Hyuga.

A month later, at the finals, Kiba watched the match between Naruto and Neji with Hinata. He appeared to have gained respect for Naruto at this point, as when he heard Izumo and Kotetsu doubting Naruto's abilities to win, Kiba remembers how he thought the same thing during his match with Naruto, and ended up losing. He also very loudly cheered for Naruto during the match. It is unknown for certain whether the reason that Kiba wanted Naruto to win is because of his newfound respect for Naruto, or the fact that Kiba wants Neji to lose because the latter hurt Hinata, or a combination of both (which is the most likely explanation). After Kabuto healed Hinata when she begins coughing up blood, he rendered Kiba unconscious (after Kiba started to remember him), leaving him unable to assist Konoha's ninja in the invasion.

In the Sasuke Retrieval arc, he was the only one on his team to assist the recovery effort, with Shino out on a mission and with Hinata not being recruited for an unknown reason. After Naruto seized the container holding Sasuke, a letter bomb (set by Akamaru) exploded and knocked Kiba, Sakon and Ukon into a gorge. Kiba and Akamaru bravely fought against Sakon and Ukon, but despite using their Double Wolf Fang against the brothers, are ultimately outmatched. Kiba retreated with Akamaru, and both were eventually assisted by Kankuro, who trapped the brothers in Kuroari before impaling them with Karasu. Kiba was wounded with severe but not life-threatening lacerations, but Akamaru had suffered much harsher damage; tendons in all four of his legs were ripped.

Kiba commonly worked with Naruto and Hinata in the filler arcs, often when Shino was absent. At one point, due to failing the Bikochu and Bounty Hunter missions, they were given a mission to test their teamwork, and told they will return to the academy because Naruto is the ninja with most failed missions, and if he fails, all fails. In the course of the mission, Kiba realized that he and Naruto argue too much, and they put aside their differences to stop some ninja who have taken on their identities. Naruto, Kiba and Hinata succeeded in their next mission together in the Cursed Haunted Castle arc.

Kiba's relationship with Akamaru is highlighted in the Kiba's Long Day episode. After Akamaru was infected with a biological weapon that caused him to go berserk, Kiba believed that Naruto was trying to find and kill Akamaru, and attempted to take Akamaru out of Konoha. Kiba eventually stopped resisting when he learned Naruto and Hana's true intentions, but was paralyzed by the prospect that their plan may still require them to kill Akamaru. He eventually regained his senses and appealed to Akamaru, causing Akamaru to regain enough of his true self to avoid killing Kiba, and allowed him to administer the antidote.

We see him in others episodes, along with Shino and Hinata, such as the one when Kurenai leaves team 8 and then the team, with Naruto, Sakura and Might Guy help her with her mission to Kurenai returns to team 8.

In the last episode of the filler arc, when some ninjas try to steal Gaara's power, Kiba, among the other genins, help the sand ninjas in this mission. He goes to help Kankuro in his fight to be hand to hand when Kankuro help him against Sakon & Ukon along with Chouji. Kiba defeats the enemy and then they go to Gaara's help. In the end, he was with all the genins saying good bye to the sand ninjas

When Naruto returneds to Konoha after the rescuing of Gaara, Kiba appeared riding on a much larger Akamaru, but says he didn't notice Akamaru's growth, due to spending so much time with him. When Naruto asked Kiba to go on a mission with him Kiba had to turn him down due to a mission he was already assigned.

After Naruto left, Kiba teased Hinata to make her believe Naruto was behind her. Realizing he tricked her, he received a scolding from her and Shino.

Later on Naruto and Team Kakashi were assigned a new mission, returning with Sora a fill in for Sai due to the latter's injuries. The team disbanded, leaving Naruto and Sora stuck together. Sora went somewhere and Naruto then found him in the park arguing with Akamaru. When Kiba saw this squabble, he angrily confronted Sora. Shikamaru and Choji saw them, and when Sora called Choji "Fatty" inciting him to join the fight. After a failed attempt by Naruto to calm the combatants, Lee joined into the fight, resulting in admonishment and dismissal from Asuma.

Kiba was also a member of the attack force of Chunin and Jonin to halt the advance of Kazuma's army. He was seen along side Rock Lee, Chouji Akamichi, and was eventually joined by Shikamaru Nara and Ino Yamanaka as the battle came to a close.

Tsunade makes a searching team presenting to Kakashi for leading it which he accepts saying that it's the perfect team and couldn't be another to do this job. Kakashi leads Kiba and his team on a mission to search one of Orochimaru's bases. They go without saying anything, even Naruto (such as Hinata asks to Kakashi). They have already a plan beginning with Shino's bugs, then with the senses of Kiba and Akamaru (specially their nose) and for last Hinata's Byakugan.
Hunt for Uchiha

Later, Kakashi formed the 8-Man Squad, which Team Kurenai became a part of the hunt for Itachi Uchiha. When the mission got sidetracked due to them being close to Sasuke's trail, Kiba managed to pick up on Sasuke's scent when even the ninja hounds were unable to, impressing Kakashi and allowing the eight-man squad to continue pursuing Sasuke. On the way however, they encountered Tobi of Akatsuki and preceded to do battle with him. They fought him, but couldn't land a single blow. The mission ended in failure when Tobi and Zetsu collected Sasuke before the 8-Man Squad managed to get there.
Pain's Invasion

When Pain began his invasion, he along with Choji, Shino, Ino, and Hinata saw the devestation. He and Akamaru then joined his mom to battle Preta Path, seemingly forcing him back with their taijutsu specializing techniques. After Pain calls back all his bodies, Tsume brags that she scared him off. Kiba mutters that she is a scary individual, as even his dad left her because he feared her. He is later seen after the devastation of Pain's Shinra Tensei. He appears to have suffered significant injuries and his mom tells him to hang in there until help arrives.
Other Media

* While it is never explained why or how Kiba can understand what Akamaru is saying, it is speculated by some fans that it is of a similar principle to Shino's symbiotic relation to is insects of sharing chakra.
* Kiba was ranked as 15th most popular character in the sixth and most recent Naruto character popularity poll. He was 12th in the fifth poll and 17th in the fourth.
* According to Kiba, Kiba's parents are no longer married since his mother scared his father away.