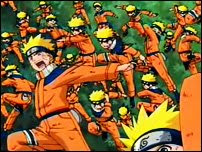 This technique creates intangible clones of the user. The clones are simply illusions and will dissipate when they come into contact with something. The illusions can be seen through by the Byakugan and the Sharingan. A person with normal eyes can also distinguish the clones from the original, since the clones will not disrupt the area around themselves with their movement (won't kick up dust, crush grass, etc.) 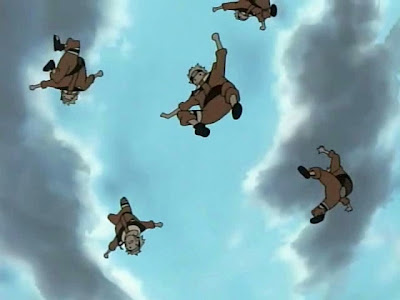 Similar to the Clone Technique, this jutsu creates clones of the user. Unlike the Clone Technique, these clones are actual copies, not illusions. The user's chakra is evenly distributed among every clone, giving each clone an equal fraction of the user's overall power. The clones are capable of performing jutsu on their own and can even bleed, but will usually disperse after one or two solid blows. They can also disperse on their own. Unlike other clones, they can't be detected by the Byakugan because the clones have the exact same amount of chakra and aren't made from any other substance, making them indistinguishable from the actual person. Sasuke Uchiha claims that the Sharingan can tell the difference during his battle with Naruto at the Valley of the End, albeit they might just make him able to keep an eye on the original Naruto.

Any experience the clones gain during their existence is transferred to the user once they are dispersed. This makes the technique ideal for spying, since the user can simply send a clone to spy on a target, then have the clone disperse itself without returning to pass the information back to the user. It's also useful for training purposes, since the total amount of experience the user gains is multiplied by the total number of clones being used to train. Using it in this manner is far more difficult, however, since a large number of clones are needed to make a significant difference in the training time. It's unclear if other types of clones possess this advantage.

Kakashi Hatake is the first in the series to reveal the side effect of this technique during Part II. Because of the manner in which the clones are created, the user must divide their chakra among the clones potentially using up all their chakra fairly quickly if the user is low on chakra or makes too many clones, such as Naruto does with Multiple Shadow Clone Technique, this jutsu's enhanced (and forbidden) form. Naruto is able to use this technique to the extremes that he does because of his tailed beast, the Nine-Tailed Demon Fox, which gives him an abnormally high chakra level. Even without the demon fox's chakra, Naruto can make quite a few clones, but nowhere near on the level he can when he has access to the demon fox's chakra, creating up til 1999 clones, during his fight with Gaara, and possibly even more during his training, in Part II. The technique can also be dangerous if the user is injured or has some otherwise debilitating physical condition at the time of the cloning, since all of the clones will be created in roughly the same state. As shown during training with Yamato, clones can go Nine-Tails unexpectedly.