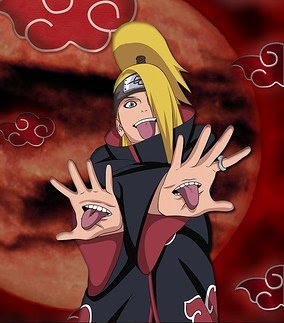 Deidara (デイダラ) was a member of the Akatsuki and was partnered with Tobi and Sasori before his death. He was the youngest member of Akatsuki

Deidara was originally from Iwagakure, although he readily abandoned the village for the opportunity of using his "art" more frequently as his village ridiculed him for it. Deidara became an assassin bomber for hire, not caring who he worked with so long as he could use his artwork. Sometime after Orochimaru left the organization Akatsuki, Deidara was located by Itachi Uchiha, Kisame Hoshigaki, and Sasori, who were under the orders of the leader Pain to recruit him. Although, at first, Deidara refused, he quickly got into a small confrontation with Itachi, where Itachi forced Deidara to join by almost fooling Deidara into killing himself with his own clay explosives via genjutsu. Deidara, having been forced into Akatsuki and taking a huge blow to his ego, carried a loathing for Itachi throughout all of his time in Akatsuki, though he was intelligent enough to recognize Itachi as a more powerful opponent.

Quick to anger and annoy , Deidara was a very hot-headed man. Something of a sadistic arsonist, he was not above relishing a good fight, and he often blew up his opponents in a very brutal fashion. Deidara's most distinctive trait, however, was his love of art. He would respect any form of it, even if it disagreed with his own. Deidara also had a habit of ending his sentences with nasal "hmm" or "un" sound, roughly translated as "yeah".

Deidara referred to his explosive ninjutsu as art, believing each bomb he made to be a significant accomplishment. He referred to his style as superflat (refering to certain types of art), and claimed pop (another art style) is dead. One of Deidara's catchphrases, "Art is a bang!" (or variations therein), was originally coined by famous Japanese abstract artist Tarō Okamoto (several of Deidara's explosives have resembled Okomoto's works too). Deidara was very proud of his art, to the point that he was simply unwilling to accept that anything could defeat it, leading to frequent overconfidence in battle.

Deidara referred to his partner Sasori as Master Sasori (サソリの旦那, Sasori no Danna) out of respect for him as a fellow artist. He also admitted, at least outwardly that Sasori was more powerful than he was due to the respect he had for him. In spite of this, Deidara wasn't above goading his partner, and they frequently squabbled over the nature of true art (Deidara holding that art is transient and departing quickly; Sasori believing fine art is something wonderful that's left long into the future). This reflected their individual natures (Deidara made clay sculptures that explode; Sasori made long-lasting puppets out of humans). Deidara outwardly seemed to respect Sasori's beliefs, but couldn't resist getting a final jab in after Sasori's death: "Like anything that is left for the future as a thing of eternal beauty... he got killed straight off."

Deidara's partnership with his second partner Tobi, however, was very different. Tobi apparently held a great respect for Deidara and frequently called him "senpai" (senior). Tobi's carefree and goofy personality did not please Deidara, who believed that all Akatsuki members should be serious and calm. Tobi frequently and unintentionally angered Deidara, which usually resulted in him attacking Tobi in a comedic fashion (e.g., blasting him with his exploding clay or strangling him with his feet). In battle, however, the two easily set aside their differences and worked well together. Deidara also seemed to have a minor respect for Tobi, as shown when he apologized to his partner in his thoughts before he initiated his Self-Destruction.

Also, as revealed in the third databook; Deidara's favorite food was bakudan, a pun on the actual food (boiled eggs in surimi) and the Japanese word meaning bombs.
Part I
Akatsuki meeting

Apeared as a hologram when Sasori asked Itachi if his little brother really did side with Orochimaru. He interrupted this and replied that Orochimaru was unimportant at that moment.

Deidara, when partnered with Sasori, traveled to Sunagakure to capture Gaara and extract the Shukaku within him. When they got inside the village, Deidara was greeted by the Fifth Kazekage himself, and the two began to fight. Deidara's left arm was destroyed during the fight. Despite the fact that he had lost one arm, Deidara still managed to defeat the Kazekage by using the safety of Gaara's village as a distraction. Deidara then took the unconscious Gaara out of the village where his partner — Sasori was waiting. The two Akatsuki members then took their captive to their hideout where they began the three day long jutsu to extract the Tailed Beast out of its host while Team 7, and Team Guy attempted their rescue operation. By the time they broke into the hideout, the jutsu was completed and Gaara was dead. Naruto was enraged and began to chase after Deidara with Kakashi following him, leaving Sasori to deal with Sakura and Chiyo.

In the chase, Deidara first tried to separate Kakashi from him and Naruto by dropping explosive clay. When the attempt failed, he simply went faster, baiting Naruto. When Kakashi revealed his Mangekyo Sharingan, destroying Deidara's right arm, Naruto finally caught up with him. Deidara dodged the attack Naruto threw towards him and Naruto's shadow clones managed to tear Deidara's clay creation(which held Gaara within it) apart. Naruto then proceeded to attack Deidara up but he only managed to destroy Deidara's Clay Clone. Deidara meanwhile hid himself and learned that Sasori was dead, killed by Sakura and Chiyo. Team Guy found out Deidara's hiding place with Neji's Byakyugan.

Outmatched and missing both arms, Deidara managed to escape by setting off another larger explosion by eating the clay of the remains of his clay bird (which Naruto had tore up earlier when he tried to save Gaara). Kakashi sent the explosion into another dimension using his Mangekyo Sharingan to protect the group. Deidara survived and went to find his missing arm and ring. He then became Tobi's new partner after Tobi retrieved Sasori's ring.

Shortly after Deidara fought Gaara and the Ichibi was extracted, we see our first glimpse of the Tobi and Deidara dynamic. Tobi happened to be one of Zetsu's subordinates, following him around and constantly pestering him about joining the organization, Akatsuki. After the near-escape from Team Kakashi and Team Gai, Deidara manages to meet up with Zetsu and Tobi, where one of his arms lay on the forest floor. Tobi just so happens to take interest in it, and begins to prod and make fun of Deidara, who in turn tells him to be quiet. They begin an argument, where Zetsu advises Tobi to not push his luck. This being one of the funnier moments between the pair, Deidara jumps to strangling Tobi with his legs, since he's missing hands.

After seeing them together in a non-partnership for the first time, we first see them as a team in the manga. We know Deidara was assigned the Ichibi, and had successfully completed the mission. Sasori had been though to previously hold the mission of capturing the Sanbi, which would have been transferred to Tobi, but it's not certain. All that is certain is that Tobi had the task of obtaining the Sanbi for extraction. The Sanbi didn't have jinchuuriki and was looming out in the oceans free. Finding the Sanbi, Tobi really showed his true colors and seemed to not have any clues what to do. With some help and guidance from Deidara, via explosives, they managed to both take out the Sanbi, an argument ensuing. Tobi was so proud of himself, claiming he caught it all by himself, but Deidara clearly wasn't having any of that, so they argued about who really caught it. This is one of, if not the only, scene we see the partnership together prior to Deidara's untimely demise.

Deidara attacked Sasuke after hearing of his (seemingly) killing Orochimaru. Sasuke's lightning-elemental Chidori proved a good counter to Deidara's earth-elemental clay bombs, and Sasuke managed to survive each new bomb Deidara used against him; however, Deidara managed to counter Sasuke's newly realized genjutsu abilities by only viewing Sasuke through his left eye, which allowed him to pierce visual illusions; this led to Sasuke being forced to run his own Chidori Nagashi through his body to purge it completely of Deidara's C-4 clay particles, which caused Sasuke tremendous harm. Deidara created his mechanical eye as a counter to the Sharingan-based genjutsu of the Uchiha clan hoping to defeat Itachi. Deidara was eventually defeated, but rather than telling Sasuke where Itachi was, he decided to feed himself clay in an attempt to self-destruct and kill Sasuke. The attempt failed, though, and Deidara was killed in the blast, while Sasuke summoned Manda to protect himself at the cost of Manda's life.

In addition to his clay based abilities, Deidara was very intelligent, often using tricks, misdirection, and calculated gambles to get his explosives in range of an opponent. As a long-range specialist, he was weaker in close combat, but skilled enough to hold off a combat specialist ninja like team Guy, handling a kunai in his mouth, and had a variety of techniques in his arsenal to escape close quarters when necessary. He also wore a scope on his left eye for long-range observation, and he had trained the eye itself to counter genjutsu, allowing him to see through and negate them. This was done in response to Itachi's powerful genjutsu skills, of which he had a considerable loathing and resolved to defeat if he got the chance. Deidara's abilities were well recognized within Akatsuki and the leader, Pain, openly admitted that he was something unique, and that his loss was a major blow to the group
at 6:51 PM