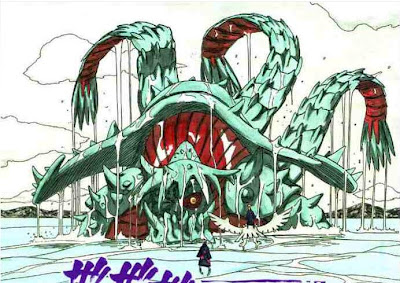 The Three-Tails (三尾, Sanbi) is a demon turtle that the Akatsuki assigned Tobi (with the help of Deidara) to capture.

In the past, the Three-Tails was imbued with an unnamed shinobi from Kirigakure, later it seemed to have been extracted from its host for reasons unclear, and was set free in the wild.

After that, the Three-Tails lived in an ocean area and remained uncaptured by any shinobi until Deidara and Tobi arrived. Right after the Three-Tails emerged from the water, it quickly swam towards Tobi, chasing him around the area. With the Three-Tails distracted, Deidara molded an explosive clay fish in an attempt to capture it. It's unclear if this marked the end of the battle, as the remainder of the battle goes unseen. As the two towed the Tailed Beast to the Akatsuki's lair after the battle, Tobi gloated of bringing the Three-Tails down with his special jutsu, but Deidara thought otherwise. It is later sealed in the sealing statue.

Since it was removed from its host, the Three-Tails lost its intelligence after it had been extracted and wasn't smart enough to control it's own strength, which made it weaker and then was easily captured and sealed.

What abilities this creature possesses remains unclear, as it did little to actually attack the two in its short appearance. It is clearly quite fast despite its size, as evidenced by its ability to keep up with Tobi, who was running on the water at the time.

Turtles are often used as the base design for sea monsters in generic Japanese folklore. The Three-Tails' design in particular was conceived as a result of series creator Masashi Kishimoto's interest in monsters, yōkai, and kaijū, mixing together various elements of those types of creatures to create a monster with a turtle's body and a shrimp's tails
at 12:26 AM