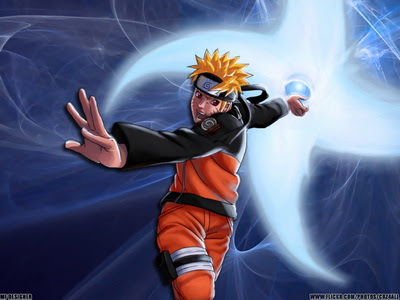 The Wind Release: Rasenshuriken is a variation of the Wind Release: Rasengan, similar to the Great Ball Rasengan being a variation of the standard Rasengan. Naruto used this jutsu to defeat Kakuzu of the Akatsuki, destroying two of Kakuzu's hearts. By manipulating the wind chakra of the Wind Release: Rasengan, Naruto was able to create four large points, making the Rasengan appear as a giant shuriken, the Rasengan in the center remaining a perfect sphere. The technique gives off a loud bell-like screech and is so powerful that it creates a storm around the area. Despite the name, because the Rasengan is a hand held jutsu, the Rasenshuriken can not be thrown, a problem that caused Choji Akimichi to question the jutsu. Instead, Naruto has to figure out a way to get close enough to his opponent and hit them. If it is successful, the victim becomes trapped in a vortex of wind chakra blades that attack the body on a cellular level so many times that Kakashi Hatake is unable to count even with the Sharingan. The wind chakra severs the chakra and nerve channels in the body. The Rasenshuriken is a vastly dangerous and powerful jutsu.

The main drawback of the Rasenshuriken is that it is a double-edged sword. While it can utterly devastates any opponent trapped in the vortex, it also greatly damages the user's body. When Naruto used the Rasenshuriken twice on Kakuzu, it caused Naruto limited cellular damage and a few broken bones. The Fifth Hokage has hence decreed the Rasenshuriken as a Kinjutsu, forbidding it as it could cause Naruto to be unable to mold chakra at all and possibly causing paralysis if important bones or organs were fractured. It should be noted that Naruto has not yet been revealed to have completed the Wind Release: Rasengan, only being about half complete according to Yamato.
at 4:44 AM