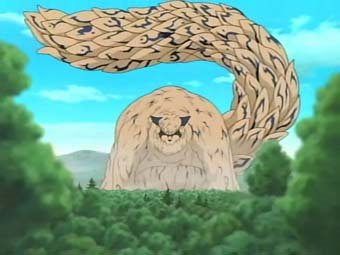 The One-Tailed Shukaku (一尾の守鶴, Ichibi no Shukaku) or Shukaku of the Sand (砂の守鶴, Suna no Shukaku) is a demon tanuki, who can manipulate sand, sealed within Gaara of Sunagakure.

It was once said to be a corrupted spirit of a Sand monk from Sunagakure that turned into a demon, but it is actually one of Tailed Beasts. It was originally sealed inside a teakettle and then placed inside its first host. When Karura, the wife of Fourth Kazekage, became pregnant, her husband ordered Chiyo to seal Shukaku inside an unborn Gaara, but only after being removed from the second host. Before she died giving birth to Gaara, she cursed all the people of Sunagakure, including her husband, for what they have done.

During the attack on Konoha, Gaara transformed into his full Shukaku form during his fight with Naruto Uzumaki, who later summoned Gamabunta. When Gaara exposed himself on top of Shukaku's head and used the Feigning Sleep Technique, Shukaku took full control of its body (Gamakichi proclaimed that its voice was kinda funky) and battled them. Shukaku's power was too much for Gamabunta to handle; so Naruto used the Combination Transformation to take form of the Nine-Tailed Demon Fox, which allowed Gamabunta to grab Shukaku, in order for Naruto to punch Gaara to wake him up, which depleted Shukaku's full power.

In Part II, Deidara was assigned to capture Shukaku. After defeating Gaara in combat and taking him to the Akatsuki's lair, Shukaku was forcefully extracted from Gaara, thus killing him. Gaara was resurrected through a combination of Chiyo's life-transferring technique and Naruto's chakra. Gaara's ability to control sand still appeared to be intact, though to what degree remained unclear.

Shukaku is intelligent, but also incoherent, giving it the demeanor of a drunkard, this fits well with the typical depictions of tanuki in Japanese folklore. Shukaku itself can translate to "drunk" in Japanese. Like other Tailed Beasts, its innate rage and bloodlust influence its behavior, and it relishes in the opportunity to kill anyone in sight.

As a host of Shukaku, Gaara has the ability to move and levitate sand at will, and is protected at all times by the Shield of Sand, regardless of his will (even self-inflicted injuries are prevented by the sand). He also suffers from lifelong insomnia, a side effect of being Shukaku's host. Whenever he falls asleep, Shukaku would eat away his personality, making him a monster. Shukaku can control the sand itself to automatically protect Gaara's body from any harm; knowing full well, that if Gaara dies, it will die too.

When angry or in a state of bloodlust, Gaara can use the sand in his gourd to take the form of a miniature Shukaku or even create the giant copy of Shukaku's body. It is only when Gaara begins to take on Shukaku's forms is he allowed access to its wind element, such as Wind Release: Drilling Air Bullet. Gaara can even allow Shukaku to take over the full Shukaku form by going to sleep, but is left vulnerable as his sleeping body is left unprotected on Shukaku's head.

The tanuki (狸) is species of dog found in Japan. The species has been called "raccoon dog" because of their similar appearance. The tanuki has been renowned for its mischievous nature and ability to shape shift and bring good fortune. Shukaku has ties to several tanuki archetypes. One is the Bunbuku Chagama tale, where a tanuki sealed inside a tea kettle, then placed inside its first host. In the series, Shukaku was reported to have been sealed within one. Some tales state of a shrine priest being a tanuki in disguise, which ties into how early in the series, Shukaku was reportedly a corrupted Sand priest.

Since Gaara was infused with Shukaku prior to his birth, it would seem that the Jinchūriki's elemental chakra abilities melded with Gaara's own; however, it's unclear if Gaara's control of sand and wind elements is a result of his own chakra or Shukaku's
at 12:05 AM