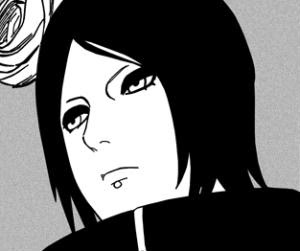 Konan (小南) is the only female ninja in Akatsuki and the only member to call her partner, Pain, by his name. Her name means "Little South".
Background

When she was younger, Konan, Nagato, and Yahiko were left orphaned by one of Amegakure's many wars, forcing them to fend for themselves. The three eventually encountered the Sannin, who gave them some food. Konan impressed them by making an elaborate flower out of the paper wrappers left behind (she also wears one in her hair). After Nagato killed the Rock Chunin, Jiraiya took them up on their offer and began to teach them Ninjutsu. Jiraiya believed Konan to have died with Nagato and Yahiko some time later, and upon seeing her again years later, he comments on how beautiful she has become, as well as her improvement in her paper jutsu.

Konan has a relatively mysterious personality. Mostly, she is stoic, calm, and level-headed (much like Pain). As a child, she was bright and relatively cheerful compared to the tough Yahiko and sensitive Nagato. However, the trauma of events since then have left her more serious and solemn and she never spoke until her most recent appearances.

She does seem to be more empathic than other Akatsuki members, as she appears sad whenever she has been reminded of her past. She also expresses a great deal of loyalty and courtesy to Pain (which he always returns), doing his bidding without question and looking out for his well-being. She seems to act as an intermediary between Pain and Amegakure, the villagers having given her the title "God's Angel" for this reason. Fans suspect that she and Pain harbor feelings towards one another as both converse the way a married couple would. Moreover, Pain freed her from Jiraiya's grasp, without hesitation or request, first thing when he entered battle. Further, in episode 81 of Shippūden, as Pain is cycling the various members' reasons for fighting, as the camera focuses on Konan's projected face, Pain offers that "love" is her reason for fighting.

She also has the ability to read Pain's emotions without him facially expressing them. As soon as Madara ordered Pain to capture Naruto Uzumaki and the Nine-Tailed Demon Fox, she could tell right away that there was something about the order that upset Pain.
Part II

Konan appears when she tells Pain that Madara Uchiha has arrived. When it starts raining after Madara leaves, she comments on how the rain makes it seem that the village is crying. She later appears when Jiraiya infiltrates Amegakure, entering the rain shower and becoming detected by Pain. When Pain stops the rain, Konan uses her abilities to find Jiraiya while Pain is changing bodies. She returns to inform Pain that it's Jiraiya, and goes to hold him off for Pain. She attacks Jiraiya with paper spears, but he sees it coming and uses his Toad Fire Technique to stop the spears. Jiraiya remembers her, complimenting her on her power and beauty, commenting that she had become "one hell of a woman". Jiraiya easily stiffens her body with oil, but she is saved when Pain appears to wash the oil out. She regroups with him after he defeats Jiraiya.

Later, in Pain and Konan's home, Madara pays them a visit to see what was keeping them. After explaining Jiraya's invasion, Madara quickly mocks Pain; Konan then quickly defends Pain once again reminding Madara that Pain is "invincible". After Madara leaves, Pain tells her to get ready to go to Konoha, summoning all six of his bodies for the mission. When they arrived, they quickly eliminated a patrol of Leaf Ninja, with Pain giving Konan orders to spare no one. She is seen asking the Konoha shinobi if they know the whereabouts of Naruto as they are contraped in her paper. However it was revealed that the shinobi were saved by the Aburame Clan's Insects. Konan, now clearly annoyed, turns to face the Aburame Clan. She retreated shortly only to discover Pain who was deciding to use one of his most dangerous jutsu. Concerned for his health, she begged him to stop the jutsu, even calling him by his real name, "Nagato". Pain however, clearly had his mind made up and continued to use the technique, Shinra Tensei.

Currently, after consulting with Pain about the use of his jutsu, she is seen departing stating she will look after him from now on (perhaps she will care for the real Nagato). She then dispersed her paper clone, indicated she could still be in either Konoha or Ame.

Konan is a shinobi of great power, as she is held in high regard by her partner Pain. However, Jiraiya held her off with relative ease. She has a natural talent for origami, as seen with the paper flower she keeps in her hair. As a child, after training with Jiraiya, she was able to form paper weapons infused with her chakra, which could pierce flesh easily. 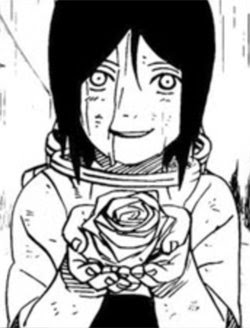 As an adult and member of Akatsuki, her powers have grown considerably. She has created a unique transformation technique which can turn her entire body and clothing into thousands of sheets of paper, which she can control at will and form into any shape. To travel long distances, she can mold them into butterflies or planes for powered flight, and to attack, the sheets can form arrows, shuriken, or kunai. She can also restrain opponents by blanketing them in sheets restricting their movement. Befitting (and likely inspiring) her title as "Angel" (天使, Tenshi), the papers can also form large wings for flight or further weaponry.

She does have weaknesses, though. Jiraiya covered her with oil to make her paper cling to itself and negate her abilities. It is possible she is also weak to water, as Pain stopped his rain technique before sending Konan out. However, when she was a child she seemed to have no problems fighting in the rain. Shino's bugs seem to be able to eat through her paper as well.