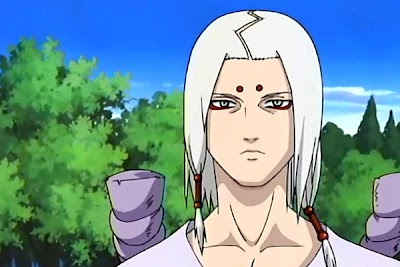 Kimimaro (君麻呂, Kimimaro) is the fifth member of the Sound Four, thus temporarily changing their group name to the Sound Five. The original four were forced to accept him against their will, as Kimimaro's combat abilities far exceeded all of their skills combined.

In Japanese, the word kimi may mean "without equal", and the word maro may mean "I" or "myself". Thus, a name is created that loosely translates into, "one who is without equal". This may be a reference to Kimimaro's nearly invincible fighting prowess.
Background

Kimimaro was the sole survivor of the Kaguya clan, who were battle loving barbarians. The Kaguya clan was wiped out when they attacked the Hidden Mist Village (seemingly for no reason other than the desire to kill). Having underestimated their opponent's defenses, they were slaughtered to the last man, with only Kimimaro surviving.

Kimimaro was referred to by Orochimaru as the most powerful member of the clan, having "abilities that even that war loving clan feared". Because of this, he was locked away in a cage for most of his life, only released occasionally when needed to fight other clans. Afterward he was found by Orochimaru and recruited as one of his most loyal servants.

While belonging to a clan that loves killing, murder, and slaughter, and being the most powerful of this clan, Kimimaro was not truly violent because he never really knew the outside world. Thus, the only reason he fought was because his clan needed him to do so, and being needed by someone was the one thing he truly desired (until he meets Orochimaru, where his desires change to serving him and ensuring the continuation of his master's dreams and ambitions). Kimimaro was selected to be one of Orochimaru's next bodies because of the unparalleled physical abilities and good looks he possessed. However, Kimimaro was afflicted by an unknown disease and was no longer useful to Orochimaru.

Kimimaro has a strong devotion towards Orochimaru, bordering on religious zealotry or considering him a father figure, as Orochimaru was the only person to seemingly care for and inspire him. On his way to the Hidden Mist, he encountered Zabuza Momochi and Haku, apparently shortly after they met each other, since Haku is still young. Interestingly, the relationships between Orochimaru and Kimimaro is parallel to that of Zabuza and Haku and to that of Raiga Kurosuki and Ranmaru in many ways, as all of them had similar backgrounds and found a purpose in living for another. His dedication to Orochimaru was is so great, that despite his body's failing strength, he was able to will himself into battle and still prove himself an extremely dangerous opponent. Kimimaro was possibly the strongest Mist ninja of his time. His unique abilities gave him both offensive and defensive powers at the same time, similar to Gaara's sand.

Kimimaro demonstrates extreme distaste for "trash" ninja, as he puts it. He generally attempts to "clean it up", by killing the person who is "trash", even if they are an ally (he plotted to kill Tayuya after she defeated Shikamaru because she was unable to deliver Sasuke by sunset). Despite his verbal disrespect of his opponents, Kimimaro has shown to have a sense of honor in battle, as demonstrated when he stopped the battle to allow Rock Lee to take his "medicine". The most notable trait that separates him from his four colleagues is rarely showed emotions other than surprise until Gaara insulted his faith in Orochimaru; causing to become enraged literally prior his death.

Kimimaro has been described as having an intimidating and slightly spiritual appearance. He is a decently tall shinobi, with visible musculature and a seemingly graceful manner of movement. Because of his illness, however, Kimimaro's original physical capabilities cannot be confirmed.

He is characterized by his pale skin, vivid green eyes, and shoulder-length white hair, which he wears divided down the middle (distinguished by an atypical 'zig-zag' hair part) with two separate partings on either side of his face. His most characteristic features, however, may in fact be his unusual maro mayu markings, which appear as red curves framing the bottom of his eyes, and dual crimson dots adorning his brow. The maro mayu eye markings appears to be a distinctive clan feature, unique to members of the Kaguya clan. However, because Kimimaro is the last of his clan, he alone possesses these markings.

As a child, Kimimaro wore his hair longer, tied in a loose pony-tail near the middle of his back, through the initial style was very similar to his current one. Also note that, when he was younger, Kimimaro's eye markings were far less noticeable than when he was older. This might suggest that the maro mayu markings grow in visibility over time. However, the question of whether this increase in visibility is due to age, amount of chakra, or something else entirely, remains unanswered.

Under the wing of Orochimaru, Kimimaro wore a specialized version of the traditional Sound-nin ensemble, consisting of a light lavender, loose-fitting, long-sleeved, zip-up shirt, black pants cut off around mid-calf, bandages wrapped around his ankles, traditional shinobi sandals, and a purple, rope-like belt tied in an inverted bow around his waist. He also wore two red, tube-like hair ornaments; one on either side of his head.

It is unknown why Kimimaro did not wear a Sound headband, or any other form of symbolic affiliation to Orochimaru. Having assumed that his deep-seated loyalty to the Sound and Orochimaru would have inspired him to outwardly display such loyalty in the form of an emblazonment, the reasons why he did not are unknown . (Note that this is only speculation.)

Also, many fans have mistaken Kimimaro's age due to his 'older', less childish and more mature appearance, often believing him to be in his early twenties. However, this is untrue, and he is indeed only in his mid-teens.

During his fight with Rock Lee, it is revealed in a flashback that Kimimaro participated in many of Orochimaru's schemes, amongst other killing the three Grass Shinobi, (that Orochimaru would later impersonate during the second part of the exam) and being at least partly responsible for the death of the Fourth Kazekage. At this point he finally succumbed to his fatal illness, that in turn would have Kabuto placing him in an intense medical care to keep him alive for as long as possible.


Kimimaro dies while attempting to bring Sasuke to Orochimaru as a way to end his life and thank Orochimaru for his doing. He succeeds in taking the barrel Sasuke was in, but Naruto Uzumaki caught up with him to take Sasuke back. Kimimaro easily holds off Naruto until Sasuke can get away on his own. Rock Lee (after recently having surgery), saves Naruto seconds before Kimimaro can kill him. However, Kimimaro easily defeats Rock Lee, even after Rock Lee (accidently) attempted the Drunken Fist style of taijutsu (which is the ability for ninja to power up by drinking alcohol). Once again Kimimaro is about to kill his opponent when Gaara arrives and saves him, who appeared as a result of renewed relations between Sunagakure and Konohagakure. Though Gaara's spectacular sand attacks manage to hold off Kimimaro a bit, Kimimaro's second state of the Cursed Seal crushes all resistance. After Gaara's ultimate attack, which essentially turned the whole battlefield into a plain of sand, Kimimaro uses the last one of his dances to turn the battlefield into a forest of bones. However, he succumbs to his illness just before he could kill Gaara, who is already out of chakra. Gaara later comes to the conclusion that no one can defeat loneliness, even if it means to care for an evil person like Orochimaru. Gaara comments that Kimimaro had the same eyes as Sasuke, which say (so to speak) "I want to confirm the value of my existence."
It is later revealed that he was with Orochimaru when he managed to trick some of the Fūma clan into joining with him sometime prior to his invasion upon Konoha.

Kimimaro was mentioned by Jugo of Team Snake when he was fighting Sasuke, as Jugo claimed Sasuke and Kimimaro were the strongest people he ever battled. Kimimaro was also capable of controlling Jugo's berserk rages without having to battle him, which made Jugo care for Kimimaro as a friend (and the reverse was true as well, since Kimimaro thanked Jugo since it was mainly his abilities that made Kimimaro's so great). Jugo's reasons for joining Team Snake include the fact that, after hearing that Kimimaro had died to ensure Sasuke reaching Orochimaru, he believed that Kimimaro's spirit continued to live on in Sasuke (despite how one major difference between Sasuke and Kimimaro was that Sasuke had no care for Orochimaru and only went to him for more power).

Kimimaro's abilities were incredible, as he was said to be, in his prime, just as powerful as Orochimaru himself. Another feat demonstrating his tremendous power was his capability of easily stopping Jugo whenever he would go on a rampage. His abilites made him well suited for close combat fighting, demonstrating tremendous taijutsu prowess combined with equally impressive speed and dexterity. According Rock Lee, Kimimaro's close-range prowess allows him to easily dodge without a single wasted movement. He has also shown capable of fighting a mid and long-distance as well. His abilities come from his Bloodline Limit Shikotsumyaku, which allows the user to manipulate their own skeletal structure as a means of combat. Specifically, it allowed Kimimaro to combine his chakra with calcium, making his bones flexible as well as more durable than steel. Kimimaro used this ability to wield his bones as weapons, and could put them in the forms of taijutsu attacks (which he called dances) to give him a variety of abilities.
Like many others of Orochimaru's closest followers, Kimimaro was given a Cursed Seal, which gives him greater power. He bears the Cursed Seal of Earth, which is said to be equal in power to the Heaven Seal branded on Sasuke and Anko. When in his Level 2 form, his appearance is similar to that of a dinosaur, with dark gray skin, six large bone spines protruding out of his back, and a long bone spiked tail. He also appears to have much greater control over his seal than any other character seen so far (with perhaps the exception of Sasuke who was able to actually perform partial transformations), since he was able to restrict its spread to his chest in order to grant him a greater surge of power without activating it fully. Despite his incredible power, Kimimaro eventually became far less useful to Orochimaru after an unknown disease left him bedridden. However, even with one foot on the grave, he still easily proved to be a very dangerous opponent, as shown by his capability of easily holding off a basic Demon Fox Form Naruto (who had strength and speed that easily put him on par with any Jonin), an intoxicated Rock Lee (even Might Guy, a High-Level Jonin of Konoha admitted that Lee was dangerous in his intoxicated state), and Gaara (who was by far the strongest shinobi in Sunagakure at the time). It should be noted that Kimimaro was never actually defeated by any of them, and would not have lost if not for his disease.