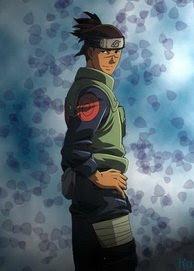 Iruka Umino (うみのイルカ, Umino Iruka) is an instructor at the Ninja Academy, characterized by the distinctive scar across his face that he has had since childhood. The name "Umino Iruka" can be taken as "umi no iruka" ("sea dolphin").

Twelve to thirteen years ago, the Nine-Tailed Demon Fox attacked Konoha, killing many people. Iruka's parents were still out fighting the Fox and were killed. Iruka was dragged back for protection by an unknown ninja but wanted to stay where he was. After it was over, everyone in the Ninja Academy made fun of him and made him feel just like Naruto Uzumaki. He was always near the K.I.A. (Killed in Action) stone monument where his parents were listed and always cried. The Third Hokage would watch him and tried to cheer Iruka up. Mizuki was a close friend of Iruka back then and usually made him feel better, but eventually his intentions became an act just to get the Hokage's approval.

Iruka has a huge like of Ramen, especially Ichiraku Ramen (like Naruto). He is shown to be quite strict when all the Rookie 9 were in Academy. It is revealed that he had a very miserable life not unlike Naruto's after the attack of the Nine-Tailed Demon Fox.

Naruto views him as a father-figure and he is willing to kill anyone for the sake of protecting Iruka. Iruka had a big influence in the development of Naruto's personality. But as the series unfolds, Iruka is seen less, but it doesn't mean that Naruto has forgotten about him. Iruka regularly takes Naruto to Ichiraku Ramen and the two of them have ramen. Iruka still from time to time takes up the role of keeping Naruto in line, whether it is keeping him from being reckless or getting too down.

Little is known about Iruka's abilities, but as a head instructor of the Ninja Academy, he is clearly proficient all forms of basic ninja skills, as seen when he disguises himself as an enemy ninja and menaces Team 7 as a pretest for the Chunin Exam. The anime filler episodes show Iruka using Sealed Bomb Square Release (方爆法陣, Fūbaku Hojin), which consists of setting an array of exploding tags and, once the target has entered, setting the tags to detonate if the target moves. Because this only applies to the target, meaning others can freely enter the array without harm, it is possible that Iruka is skilled in this area.

His parents were killed by the Nine-Tailed Demon Fox when he was younger, though he holds no hostility towards its container, Naruto Uzumaki. In fact, Iruka is one of the few people at the start of the series who values Naruto as a person, being able to relate with Naruto's methods of trying to gain attention. Because he, like Naruto, was forced to grow up without parents, and was socially isolated as a result, he can relate to Naruto in this regard as well and has assumed the role as Naruto's father-figure. Once Naruto becomes a ninja Iruka starts to underestimate Naruto, and as such become overprotective of him, though he in time discovers that Naruto has all the markings to become a great ninja.
Chunin Exams

Iruka was chosen as the messenger for the Chunin Exams. He would greet those who passed the second phase and appeared from a Heaven and Earth Scroll. The first team he met was Team Kakashi. He introduced the writing about putting Heaven (mind) and Earth (body) together. Naruto, to his excitement for passing worried Iruka because of the earlier immaturity but Naruto went on saying that he had changed ever since he got his forehead protector. This made Iruka feel better.

Tsunade orders Iruka to go on an S-Rank mission. He, along with Naruto and Pakkun, meet Mizuki. As Naruto and Pakkun take care of Fujin and Raijin, Iruka goes on to a forest-like area to fight Mizuki who now has unbelievable strength. Mizuki has improved so much that Iruka almost has no chance against him. They later go to a dark place to fight where Iruka is beaten similar to how the Third Hokage fought the First and Second Hokage with the Bringer-of-Darkness Technique. Iruka concentrates more and finds Mizuki, who later escapes. They then meet Mizuki's fiancée, who reveals that earlier he stole the scroll for the good of Orochimaru. Then after Mizuki uses a potion to obtain more power at the cost of speed, they finally find him again and battle Mizuki in his man/tiger form. They then notice that Mizuki is decreasing in speed and use that as an advantage. Iruka uses his headband to direct Naruto into using the Rasengan in the correct direction, which they injure Mizuki and win the battle. Tsunade and the Medical team then recover Mizuki. Iruka offers to treat the group to ramen, however Tsunade says that he and Naruto need to recover first.
Part II

When Naruto Uzumaki came back from his training with Jiraiya during the Timeskip, Iruka came to Naruto to have some Ramen. He was proud of how much Naruto had grown, both skill-wise and as a person. He also cheered Naruto up about being the only member of his class still being a Genin by saying it will only be a matter of time; and even if he doesn't, it by no means deminishes how strong he is. When Naruto leaves for his first major since returning to the village, Iruka feels proud of Naruto and believes he no longer needs to be protected.

When Naruto finds out Jiraiya was killed by the Akatsuki leader, Pain, Iruka comforts Naruto and tells him that Jiraiya will always be proud of him.

During the invasion of Pain he discovers a wounded Leaf ninja. However he is trapped by Pain and asked for the location of the Nine-Tails Beast. Iruka refuses and Pain moves in for the kill. However he is saved by Kakashi and flees with the wounded ninja as Pain fights Kakashi. Iruka later meets up with Sakura who tells her that Akatsuki are behind the attack. He tells her to head to the hospital which is beginning to fill up.